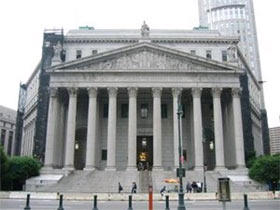 A former client services associate at the Melville, Long Island branch of Morgan Stanley filed a lawsuit in Manhattan Supreme Court claiming her old boss "tried to 'sexually assault her' with a pencil", stole her underwear, and complained to her about how his wife wouldn't give him oral sex. Lisa LaMacchia claims that a human resources official told her to "suck it up" after Richard Dorfman allegedly threw a file at her and called her a "f---ing bitch." LaMacchia is seeking monetary damages.

The lawsuit describes a number of incidents. Dorfman allegedly stole her underwear from her gym bag, asked her to wear dresses because his wife was fat, and call her a "bitch" in a lobby. From the Daily News:

After she confronted Dorfman on Sept. 7 about bonuses she had been promised, he allegedly put his hand up her skirt and groped her genitals.

An hour later, when she again demanded the money, he "smiled" and suggested that if she wanted it, having sex with him "wouldn't be a bad idea," the papers say.

As she turned to leave, he put his hand up her skirt again, this time holding a pencil, the suit charges.

And when she met with human resources again, they suggested she move to another branch, "an office farther from her home, and to a job with less pay, vacation time and other benefits," according to the AP. She was unhappy with the decision and went on disability leave, during which she was fired. Morgan Stanley denies LaMacchia's claims, but her lawyer Joseph Ranni said, "This is how these guys operate. Subordinates are just fair game, especially young women. And if managers think they can do things with impunity, they're emboldened."