Ex-Fiancé and His Cousin Arrested for Murderous Plot 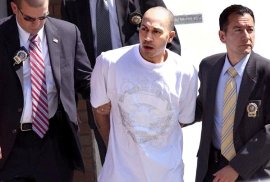 Families of a murder victim and her ex-fiance are reeling from the revelation the ex-fiance and his cousin were behind the killing. Carlos Cruz, 36, admitted to paying his cousin $1,000 to kill his 18-year-old girlfriend, Chelsea Frazier, on a deserted Bronx street and stage it to look like a robbery, all in front of their 1-year-old son.

Cruz, Frazier, and their son had traveled from Massachusetts to the Bronz, to visit Cruz's family and to do something shopping for baby Alijah. Cruz had claimed when he pulled over his car to change a diaper, a gunman approached them and during the struggle, Frazier was fatally shot seven times. A witness had described seeing the shooter, a man with dreadlocks, running from the scene, with Cruz chasing him, yelling something. According to police, Cruz was yelling, "Wait! You forgot to shoot me!"

The witness described the shooter as having dreadlocks and driving a green SUV. With Cruz in the hospital, police noticed his cousin, Devon Miller, 25, had dreadlocks--and happened to drive a green Chevy Tahoe. Police Commissioner Ray Kelly said, "The detectives kept an open mind. They were attuned to every nuance, to the slightest inconsistencies.”

Frazier's family says she wanted to break up with Cruz, who couldn't handle the idea (and didn't want to pay child support if they broke up). Frazier's grandfather told the Daily News Cruz once said, "If I can’t have her, then no one will." Her mother apparently told Frazier not to go to the Bronz with Cruz, but "She said, ‘Oh, Mom, it’s all right, we’re buying spring and summer clothes for the baby.’"

The NY Times reports that once Miller admitted to the killing, the police were able to get Cruz to confess. Frazier's parents have taken Alijah back to Southbridge, MA and are mourning her death; her stepfather said, "I just hope it happened quick and she didn’t suffer." The Boston Herald notes similarities between this killing and the 1989 murder of pregnant Carol Stuart by her husband Charles.