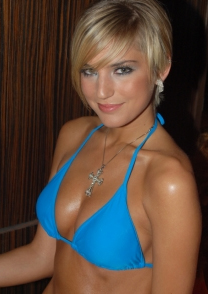 Midtown's Hawaiian Tropic Zone Restaurant, whose bikini-clad waitresses make Hooters look like Chuck E. Cheese, has been hit with a $600 million discrimination lawsuit by four female former employees who accuse executives of ignoring their complaints against one-time general manager Anthony Rakis. The lawsuit declares that Rakis's relentless sexual harassment escalated into rape after a pre-opening party in 2006, when he jumped into the cab of former floor manager Giulietta Consalvo. Rakis allegedly threw money at the driver during the assault and said, "Keep driving, buddy," leaving her at her apartment "appearing drugged and disoriented."

Court papers obtained by the Daily News maintain that a few days later, Rakis begged Consalvo not to tell anyone: "I went to my priest this weekend. Please don't tell anybody. It was the alcohol."According to the Post, he also added, "I used to be a very bad person, but my wife turned me around. Please think about my wife," who was pregnant at the time. Another plaintiff, former hostess Stephanie Cheng, says Rakis forced her to perform fellatio on him in a basement storage area last March, telling her, "Don't say anything or else you'll be in hot water like I will be. I have a wife and I have kids and I can't afford to lose this job."

Want more sordid details? Big shot chef David Burke is also named in the lawsuit for allegedly groping Consalvo, who says Dennis Riese, chairman of the company that runs the restaurant, gave her a $10,000 raise and thanked her for not reporting the rape to police. Rakis's lawyer denies the allegations, and Burke was unavailable for comment. When Hawaiian Tropic Zone opened, it was learned that the waitresses live two to a room in an Upper East Side dorm, and Rakis came off as a world class asshole when interviewed by the Observer (scroll down) in 2006.