Ex-Con Who Looks Like George Costanza Convicted Of Bank Robbery

A year ago, a pair of men robbed a Capitol One branch in Bensonhurst, taking a "significant" amount of money. It turned out one of the men was "7-second bandit" Jack Mannino, who has robbed dozens of banks. The authorities figured that Mannino was involved because he left his wallet in a getaway car two blocks away! 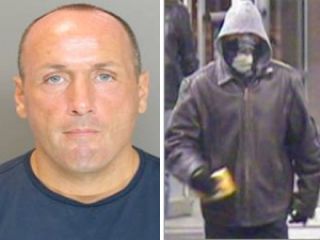 Jack Mannino and a masked robber believed to be him (FBI).

Mannino copped a plea and testified against his accomplice, Gary Fama. Mannino also explained that he left his wallet in the car because he and Fama were rushing to get out when the car's transmission blew out. Further: The car was registered to his girlfriend, who had previously complained that Mannino wasn't putting enough money into their household.

Fama, who allegedly has ties to organized crime, was arrested in March. One witness described him as "Little to no hair, stocky, wearing glasses... He reminded me of ... George Costanza."

The Daily News reports the men got to know each other in prison and that court papers said, "Mannino picked Fama up from his mother's house and the two men drove around the neighborhood looking for a bank to rob. During the drive Fama suggested they rob the Capital One Bank because he had robbed it before and had 'gotten away with it.'"

Fama was found guilty on bank robbery and firearms charges yesterday; he now faces up to 17 years in prison. As for Mannino, he hopes to get a reduced sentencing for testifying against Fama. But his own defense lawyer said to him during the trial, "You must be the worst criminal in the history of criminals.”