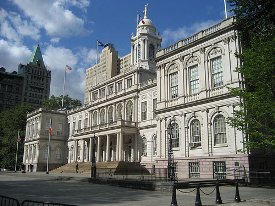 Two former staffers under City Council member Kendall Stewart were "arrested and charged on mail fraud and money laundering charges" from the U.S. Attorney's office, according to WNBC.

Asquith Reid, Stewart's former chief of staff, and Joycinth Anderson are accused of misappropriating "hundreds of thousands of dollars of taxpayer funds for their personal gain." According to the indictment, $356,000 was put into the "Donna Reid Memorial Education Fund"--home address at Reid's house--in 2005. And money was taken out of the fund's bank account ways like writing checks out to cash and $31,000 in cash via Western Union to Jamaica.

Stewart, who represents Brooklyn's Flatbush, East Flatbush, Flatlands neighborhoods, had been subpoenaed in the probe back in January. It was during this investigation that the slush fund practices of the City Council Speaker's office were further investigated (Speaker Christine Quinn says she brought it to the attention of the U.S. Attorney's office). Last week, Quinn announced more reforms to make the budget process more transparent.