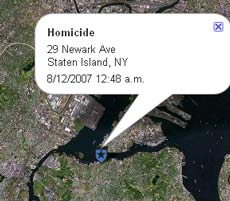 Last night, a woman was killed outside her Staten Island home. The victim, in her 40s, lived at 29 Newark Avenue in the Port Richmond section and was shot multiple times in her back. Her 26-year-old son was also shot in the stomach, and police believe he was trying to protect his mother.

One of the victim's relatives found the victim and her son laying on the ground. He told the Post he called 911 after hearing the shots, "When I came back she wasn't breathing, so I gave her CPR and she came back." The victim died at Richmond University Medical Center; her son is expected to survive his injuries. They had recently moved to the house, and neighbors were shaken. One had just moved to the neighborhood and said to the News he had moved there because of a murder in his old Connecticut town, "This is my first night in our new place.... It's really strange."

Police think that the victim's ex-boyfriend confronted her. She had apparently broken up with him recently, and the shooting may have been an act of revenge. Reports say the suspect, named "Troy," was last seen in a dark car heading towards the Verrazano Narrows Bridge.

#crime
#medical center
#murder
#Narrows Bridge
#news
#police
#port richmond
#shooting
#staten island
#troy
#university
#Verrazano-Narrows Bridge
#When I
Do you know the scoop? Comment below or Send us a Tip
A new Gothamist is coming! We’ve moved comments over to our beta site. Click here to join the conversation and get a preview of our new website.