Police are questioning the ex-boyfriend of Michelle Marks, the 23-year-old fatally shot in the head just outside Brooklyn Bridge Park on Monday night. Cops brought in Lamont Wright, 53, yesterday, according to reports, but have not yet charged him, according to an NYPD spokeswoman, who would not confirm the man's identity.

Marks had just left work at the pizzeria Fornino in the privately run park and was on the phone with her current boyfriend, Sam Hall, when she was killed.

"Mom, the guy is at her job with a gun," Hall texted Marks’ mother Pauline at 9:40 p.m. as he was talking to Marks, according to the New York Post.

Hall told the tabloid that he called 911 on another phone while on the line with Marks.

"When I seen [the text], I got a little startled. I didn’t think he was going to use it. I wasn’t expecting him to go that far," Pauline Marks told the paper.

Hall was on the phone with Marks for what turned out to be her final moments.

"I heard somebody speak to her in the background. She said ‘I don’t want to talk,’" Hall told the Post. "There was a bang. The connection was going in and out and I just heard a commotion and that was it. The line went dead and that was the last time I heard from her." 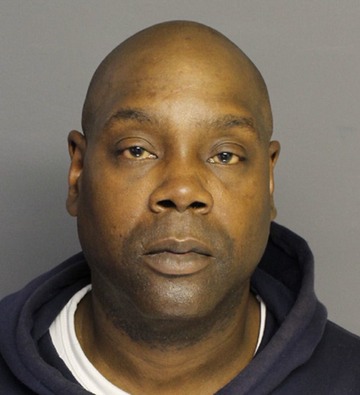 Wright had menaced Marks in the past, and she had taken Tuesday off to file for an order of protection against him, Pauline Marks told Pix11. The grieving mom told the Daily News that she first met Wright mere days ago, when he hit her daughter.

"I just met him Sunday for the first time," she told the tabloid. "I heard Michelle yell 'Mom!' from outside, and I opened the door and saw she had fallen against the wall. He had hit her. She came inside and he just stood there. I asked him why he hit my daughter. And he just stood there and looked at me like 'I'm gonna hit you.'"

He was standing expressionless in the doorway, according to Pauline's description.

"I don't know if it was drugs or what, but something was wrong. He didn't run or anything. Just stood there staring. No remorse...no smile...nothing."

Wright has four outstanding court cases for minor charges, court records show. He served a year in prison in the early 1990s for attempted burglary, according to prison records, and was convicted in 2007 of raping a 16-year-old girl, according to the state sex offender registry. He has an address listed in Flatbush.

Pauline Marks said that before her death, Michelle "was working and feeling really good about herself," and planned to move to California. "She had a plan," she said.

Marks's coworkers gathered on Tuesday to mourn her loss.

"Michelle left here as happy and effervescent as she walked in the door," he told reporters. "There was absolutely no way to know that she was being followed or being sought after by anybody," he added.

24yo Michelle Marks finished work at Pier 6 at BK Bridge Park then mom tells @NBCNewYork she was stalked/shot by man pic.twitter.com/LidTGJrmJ6