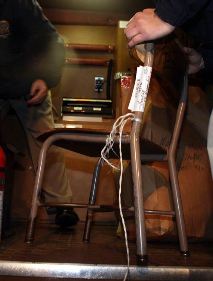 We hope the jurors in the Nixzmary Brown murder trial get this weekend to relax, because the first few days of the trial have been intense. After the emotional opening statements on Wednesday, the prosecution showed a glimpse into the 7-year-old girl's tortured life.

The prosecution contends that stepfather Cesar Rodriguez's abuse of Nixzamary led to her death. Rodriguez and her mother Nixzaliz Santiago were raising a total of six children in a small Brooklyn apartment, on a January night in 2006, after Nixzmary "stole" some yogurt she was not allowed, Rodriguez lost his temper, beat her and held her under water. (Rodriguez, who admitted to beating her on many occasions, was punishing her for putting toys in the printer; she was 36 pounds and starving - 7-year-olds in the 50th percentile are around 50-55 pounds).

The NY Times listed some of the grim evidence found the apartment: "A child’s wooden school chair with a length of nylon twine tied to it. A bloodstained Donald Duck pillow. A cat litter box and its contents, 13 lumps of human excrement. A blanket trailing a piece of duct tape." Jurors also saw bungee cords used to tie Nixzmary up. The Daily News has a gallery - warning, it's got some disturbing images.

The prosecution also showed photographs of the family's refrigerator, full of food, seemingly to rebuke the defense argument that Rodriguez was trying to conserve food, since the family was so poor. Detective Joseph Bello said, "In the middle shelf, you see a Jell-O product, a yogurt container. You can see that some are missing from the container. It's not a full package." Bello also said of seeing Nixzmary's body, ""She was severely bruised, a purple tint covered almost her whole body."

The defense seized upon a photograph of a jar from the apartment. Lawyer Jeffrey Schwartz contended that it contained a fetus and that Nixzaliz Santiago's miscarriage made her unstable and violent towards her daughter. Schwartz later told reporters, "It really shows how demented that woman was." (A source says it's not exactly a fetus, but it is tissue from a miscarriage.) Santiago will face a separate murder trial for her daughter's death.