Epstein, 66, pleaded not guilty, and yet the stories about his predilections have been percolating for years: A shadowy billionaire who lured a steady stream of underage girls into his various mansions, enticing them to perform sexual favors for him and his mega-wealthy friends. An enigmatic businessman who recruited young women to bring in even more minors so that he would have, according to prosecutors, "a vast network" of girls available on demand.

The charges Epstein now faces stem from a pattern of behavior that allegedly unfolded between at least 2002 and 2005, and are effectively a repeat of those he faced in the mid-aughts. In 2007, however, Epstein accepted a plea deal from current Labor Secretary, and then-U.S. Attorney, Alexander Acosta, avoiding prosecution and a possible life sentence to serve just over a year in a relatively ritzy Palm Beach jail instead. A series of articles the Miami Herald published in late 2018, however, revived scrutiny of Epstein, and here we are: Buried in an avalanche of sickening allegations that have slowly accumulated over the years.

Let's attempt to dig ourselves out, shall we?

How has this been hiding in plain sight for so long?
Thanks to the aforementioned plea deal, Epstein has been able to say things like, "I'm not a sexual predator, I'm an 'offender' ... It's the difference between a murderer and a person who steals a bagel." Actually, that's a real thing he did say in 2011, to the NY Post. But the whole reason he swung that deal in the first place? His outlandish net worth afforded him a high-powered legal team—Alan Dershowitz and Kenneth Starr—whose members allegedly went after individual prosecutors and their families. And then, the plea itself reportedly refers to "information" he provided federal investigators, possibly in relation to Bear Stearns (his former employer) and the financial crisis.

Epstein's status also meant he could, allegedly of course, dictate the tone of media coverage. In 2002 and 2003, for example, when Vanity Fair's Vicky Ward reported an in-depth story probing the extremely murky source of Epstein's extravagant wealth, she noticed her subject seemed to care less about her discovery of his financial inconsistencies than he did about his sexual reputation. "What do you have on the girls?" Ward says he kept asking her, and indeed, she had two young women and their mother, all of whom vouched for Epstein's sexual manipulation of the younger, underage sister. According to Ward, under intensive pressure—possibly physical menacing—from Epstein, then-Vanity Fair editor Graydon Carter cut mention of the alleged abuse from the piece. Carter now says that he lacked confidence in Ward's reporting; other Vanity Fair journalists beg to differ.

Graydon deleted thoroughly reported facts from some of my stories when subjects called him to complain. Believe @VickyPJWard. https://t.co/PAXpOmoH6d

How did Epstein make his money?
Extremely unclear! Epstein contends he built his fortune managing billionaires' assets, but Ward's reporting points to far more underhanded alliances—mentorship by big-time grifter Steve Hoffenberg, for example—and an ouster from Bear Stearns over shady business practices. Still, nobody really knows. It bears noting, though, that Forbes has never ranked Epstein on its billionaire lists, because despite his posturing, "there is scant proof he holds a ten-figure fortune." Also: The NY Times has not been able to find any record that Epstein ever paid for his $56 million Upper East Side mansion.

It's pretty amazing that we still don't really know where Jeffrey Epstein has gotten his money from.

This detail from a 2002 profile shows just how incredibly credulous people have been. He wanted to short the ... Tibetan stock market? O RLY. https://t.co/lOecmelNVC pic.twitter.com/dzAztMhHHx

Consistently, the Herald reported, Epstein's victims "came from disadvantaged families, single-parent homes or foster care," and many were "one step away from homelessness." He allegedly paid his recruits to enlist more girls, wherever he had properties. One woman, Courtney Wild, now says she began working for Epstein in Florida, when she was 14 and still in braces. Epstein, she has said, made her a recruiter. "He told me he wanted them as young as I could find them," she told the Herald. "If I had a girl to bring him at breakfast, lunch and dinner, then that's how many times I would go a day. He wanted as many girls as I could get him. It was never enough." 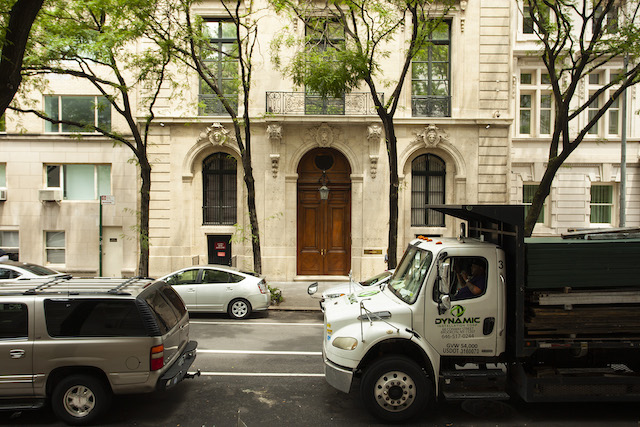 The enormous front door to Jeffrey Epstein's Manhattan mansion, which the NYPD and FBI searched this weekend. (Jake Dobkin/Gothamist)

In NYC, he reportedly brought in underage models from around the world and housed them in a building he owned: In her 2003 article, Ward quotes an unnamed woman who recalls parties full of "young Russian models" at Epstein's Upper East Side townhouse, a situation that "horrified" some of his guests.

That same Manhattan mansion, the one where investigators reportedly found hundreds-to-thousands of apparently illegal nudes on Saturday, is said to be one site where Virginia Roberts Giuffre allegedly worked as Epstein's teenage sex slave. Giuffre contends that she met Epstein in 1999, while she was 15 and working a summer job at Donald Trump's Mar-a-Lago. Until 2002, she says, she was made to have sex with Epstein and his rich friends in New York, New Mexico, the U.S. Virgin Islands, and Paris, France.

Who were Epstein's friends?
British royal Prince Andrew (third son of the Queen); British aristocrat Ghislaine Maxwell; Jean Luc Brunel, co-founder of the MC2 modeling agency; Dershowitz; and Bill Clinton, who once rode with Kevin Spacey on Epstein's private plane (which gossip rags reportedly dubbed the "Lolita Express") to a variety of counties in Africa. In the past, Epstein has also been accused of trafficking the girls to some powerful men he ran with, as a means of getting dirt on them and, it would follow, assuring their loyalty.

The most damning association award, however, goes to President Donald Trump. In 2002, Trump told NY Mag: "I've known Jeff for fifteen years. Terrific guy. He's a lot of fun to be with. It is even said that he likes beautiful women as much as I do, and many of them are on the younger side. No doubt about it—Jeffrey enjoys his social life."

In 2017, Trump's camp denied the president ever had any relationship with Epstein, but contemporaneous media reports provide evidence to the contrary. Ward's 2003 article names Trump among Epstein's frequent dinner guests, and as Vox reports, Epstein certainly had Trump's number, and frequented Mar-a-Lago until he got himself banned by making a move on a masseuse. The pair appear to have spoken on the phone on multiple occasions, and indeed, Trump was documented attending a number of Epstein's house parties in the late 1990s and early 2000s.

Which brings us to another rape allegation against our current President.

Did Donald Trump rape a 13-year-old girl?
A series of lawsuits, dismissed and repeatedly refiled in California and New York in 2016, allege that in 1994, Trump repeatedly raped a woman identified by the pseudonym Katie Johnson at Epstein's sex parties, when she was just 13 years old. The lawsuits says that Trump threatened "her family would be physically harmed if not killed" if Johnson came forward. Trump has categorically denied the allegations, and although Johnson provided a witness to corroborate her account, she has also left a convoluted trail journalists have had an impossible time following, and has so far declined to reveal her actual identity. So the short answer on this question is: Johnson's story can't be confirmed, so we can't know.

In any case, as Epstein's case draws widespread attention and dredges up the president's past once again, Trump now maintains that the two severed ties around 2004.

Trump, in Oval, says he had a falling out with Jeffrey Epstein 15 years ago, so he was not a fan.

Why now, and what's next?
So, yes, Epstein already signed a plea deal in Florida—a deal former federal prosecutor for the U.S. Southern District of New York Elie Honig described as "completely unprecedented" in an interview with PBS. But the plea pertained to state charges, Honig pointed out, whereas Monday's federal indictment pertained to incidents that allegedly occurred in multiple states. Plus, New York places no statute of limitations on sex trafficking of a minor, meaning Epstein can still be prosecuted for crimes investigators believe he committed over a decade ago.

But that's all been true since 2007, so what catalyzed all of this? At a press conference on Monday, Geoffrey Berman—U.S. Attorney for the Southern District of New York—declined to say why the SDNY decided to pursue the case now, but did tip his hat to the Herald's investigative reporting. The indictment also comes months after the Manhattan District Attorney's office was widely criticized for allegedly having aided in the cover-up of Epstein's crimes in 2011. A spokesperson for the D.A. told Gothamist one of its prosecutors had just made a "mistake."

For now, Epstein is being held without bail at Manhattan Correctional Center until at least Thursday July 15th, the date of his bail hearing. He faces up to 45 years in prison if convicted

Epstein’s lawyer, Reid Weingarten, told reporters yesterday that the new charges were merely rehashing allegations that had been settled in 2008. “To us this indictment is essentially a do-over,” Weingarten said. “This is old stuff. This is ancient stuff.”

At Epstein's arraignment on Monday, alleged victims Michelle Licata and Courtney Wild were among those in attendance in the courtroom. Wild, who filed a lawsuit against the Justice Department in 2008 over its handling of the earlier plea deal, called the charges "overwhelmingly past due."

Accuser Sarah Ransome, who alleges that she was recruited and trafficked for sex by Epstein in 2006 and 2007, said yesterday that Epstein's arrest "is a step in the right direction" for holding him accountable "for his crimes and restore my faith that power and money can't triumph over justice."