Everyone Into The Root Cellar: Thunderstorm Muscles Into NYC

Update: There was a sunset double rainbow. Everything's fine.

If you happened to glance up at the early-evening sky, you might have noticed some dark storm clouds gathering above—right before the great whiplash of wind and rain was unleashed upon the city, in full view of millions of social media accounts.

Storm is coming. Taken 5 minutes ago from the 51st floor of Met Life Building. H/t to my friend Rob Wotton. pic.twitter.com/CjbesETN0n

When you look up from your work and it's suddenly Gotham City outside. And no, no filters.

At least I should be able to find a Citibike... pic.twitter.com/33KvZpSdY2 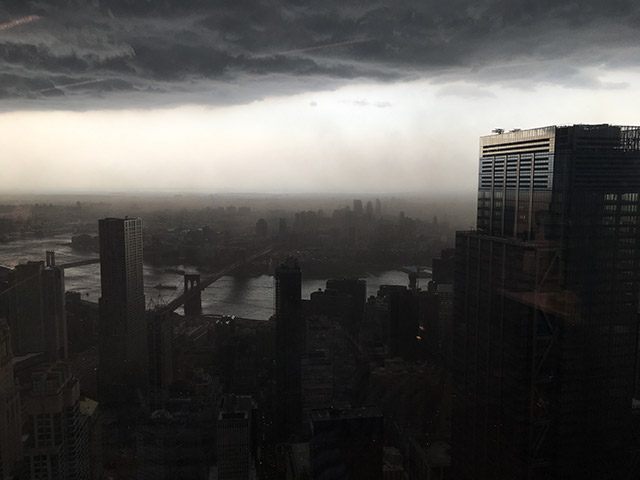 This is #Brooklyn right now pic.twitter.com/zfup6D5YGn

Right now. NYC's harbor with the Statue of Liberty on the right and the Verrazano Bridge on the left. pic.twitter.com/7xclFKRNYF

TFW one minute u r sitting in the park with friends and the next minute u r going to die pic.twitter.com/li9C52qraM

A severe thunderstorm warning is in effect. Right now, people are divided between those who decided to flee the office and those who are fearlessly riding out the storm at work-issued standing desks. Gothamist Editor-in-Chief John Del Signore decided to attempt a subway commute home, abandoning his grand plans to ride his bike. "There was a feeling of hell about to break loose upon the city any second as I scrambled to the Spring Street station," he recounted from underground.

Things are getting a little hairy:

Some people think the Upper West Side is boring. pic.twitter.com/22l7cV7bW4

Whoa! That is water being blown out of a pool right now on top of a high rise in Midtown! #nbc4ny pic.twitter.com/BDMXDwP999

Just saw the top of the water tower get ripped off by wind. Looked like a patio umbrella when it was falling. Sounded like an explosion when it hits the ground. pic.twitter.com/n67K9at7bG

i am sure it will be fine talia pic.twitter.com/SGLwPLQuZc

The MTA has suspended Metro-North on the Hudson, Harlem, and New Haven lines:

Hudson, Harlem and New Haven Line service is currently suspended to ensure customer safety during the course of the thunderstorms in our service area. Customers are advised to avoid GCT until further notice.

The MTA says, "As a result of downed trees across the northern suburbs affecting all rail lines, Metro-North Railroad has suspended service on the Harlem Line, Hudson Line and New Haven Line until further notice. To prevent overcrowding of Grand Central Terminal, the Terminal’s entrances are being closed temporarily. Customers are asked not to enter Grand Central Terminal until train service can be restored."

Update: The MTA has announced that Hudson and New Haven service has resumed with delays and some suspensions along the way:

Hudson Line service has resumed between Grand Central Terminal and Croton-Harmon with delays of up to 60 minutes. Service between Croton-Harmon and Poughkeepsie remains suspended due to the of multiple downed trees. Please listen for announcements at your station.

New Haven Line service has resumed with limited service with delays of up to 60 mins. Access to GCT is limited to the 42nd St entrances.

NYC is under a Severe Thunderstorm Warning until 5:45 p.m.:

Get ready for those subway waterfalls! Update: Done.

#storm
#thunderstorm
Do you know the scoop? Comment below or Send us a Tip