Everyone Agrees: Plax is in an Idiotic Mess 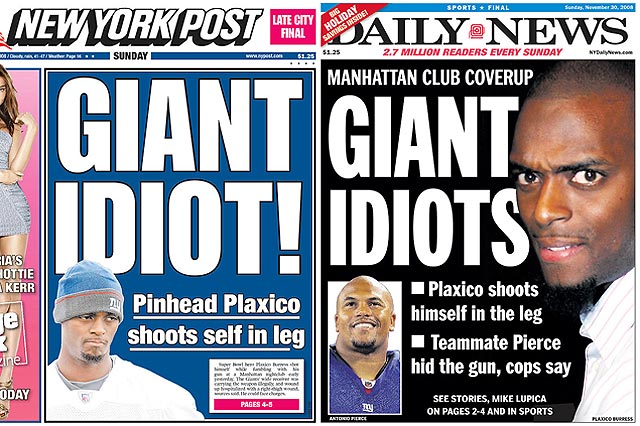 Stephon Marbury must be smiling to know that in one of his likely final days as a Knick, he gets the day off from being the bullseye of the New York media's lambasting. That's because the details that have spilled out surrounding Plaxico Burress's accidental shooting of himself are nothing but embarrassing and incriminating for the Giants star wide receiver. Once police can obtain a warrant from the DA's office, they are likely to arrest Burress on felony weapons charges since the only permit Burress had expired in May and that permit was from Florida thus making it invalid in New York and New Jersey. 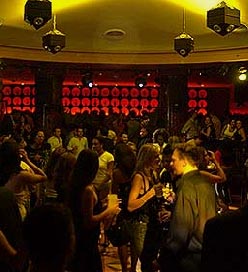 Security at the door of LQ nightclub in midtown had stopped Burress when they spotted the gun, but eventually waved him through when he insisted he needed it for his own safety. After having several drinks, the specifics about how it went off are unclear. The News says that the gun slipped down his pant leg before firing in and out of his thigh. The Post says Burress was in a secluded area with a security guard when he "took the gun out and started to unload the bullets while drinking a glass of wine." Burress then refused an ambulance and left the club. He would later arrive at Cornell Medical Center around 2 a.m. with his wife and an unidentified man to be treated for the bullet wound on his already injured right thigh.

That unidentified man who arrived at the hospital may have been Giants linebacker Antonio Pierce, who could also be in trouble with the law for his involvement with the incident. Pierce was with his teammate at the club, tended to him when the shot went off and may have left the scene in order to hide the weapon somewhere in New Jersey. The News says that Pierce's lawyer is trying to strike a deal with cops to avoid any criminal charges in return for his cooperation. Cops are expected to get a warrant to search his car, where Burress is believed to have had the gun at some point. Pierce left for Washington where he is expected to suit up for today's game against the Redskins.

As for Burress, he was released from the hospital at 12:45 p.m. Police say they were only informed of the incident when the Giants "quietly reached out to report it." Neither the club nor the hospital had reported it. When police arrived at Burress's home yesterday afternoon, his wife Tiffany first tried to wave them off and then told them through the intercom the she would be right down. Cops say they left after waiting half an hour and finally got in when they returned at 8 p.m.

On top of any legal action, Burress may face a suspension under the NFL's conduct policy. Both the Post's Mike Vacarro and the News' Mike Lupica say that after a season of dealing with Burress incidents both on and off the field, it's time for the Giants to part ways for the receiver--despite the five year contract he just signed this off-season. As Lupica puts it, "Sometimes you have to get rid of somebody who is part of the heart of your team to preserve that team's soul."