Of all the strange moments in the wake of the collapse of Andrew Cuomo's Amazon HQ2 deal, the strangest may have been when the governor used the uproar over giving $3 billion in tax breaks to Jeff Bezos's tech giant to argue for the elimination of a subsidy that he himself has championed.

“The Senate’s position was very clear on Amazon, ‘We are against tax incentives to bring business to New York,’" Cuomo told reporters last month during the run-up to budget talks. To be "wholly consistent," he continued, state legislators should say "‘that’s why we’re against the film tax credit’ because it’s the exact same point.”

The governor didn't mean it, of course — something he made clear when he snuck a two-year extension to the film tax credit into the final state budget. Cuomo's threat to eliminate the program — which currently provides $427 million a year to underwrite the costs of film and TV productions in New York, by far the state's largest corporate subsidy program — was, State Senator Liz Krueger told the Albany Times Union last week, a "dare" to Democrats in the legislature to publicly oppose a credit that has strong support from labor unions, especially the Teamsters.

Cuomo wasn't wrong, though, that many of the same Albany voices that helped kill the Amazon deal have lobbied to keep the film credits alive. Senator Michael Gianaris, whose appointment to the state Public Authorities Control Board as a vocal Amazon opponent was the straw that broke that deal's back, has strongly backed film subsidies, saying, "Anyone who compares the Film Tax Credit to the secretive and failed Amazon deal does not understand economic development. It is not comparing apples to apples but apples to spaceships."

And Krueger, who has criticized not just the governor's proposed Amazon subsidies but other corporate tax kickbacks as well, told WNYC's Brian Lehrer last month that the film credit "has a documented value year after year after year." (Neither senator responded to repeated Gothamist requests for comment.)

The numbers on the film tax credit, though, show something different: a program that has cost state taxpayers $6.5 billion over the last 15 years, for an economic benefit that is somewhere between negligible and negative. That payments to the film industry to operate in New York have now been guaranteed at least through 2024 is a testament to how even in the post-Amazon era, some corporate subsidies remain more equal than others.

The state's film tax break was first started in 2004 under Governor George Pataki, at a time when other states — and especially Canada — were beginning to take a bite out of New York's film business by offering subsidies of their own. (This was the era when the comedy New York Minute, for example, showed the Olsen twins playing hooky in a Manhattan that was actually played by Toronto.) Film-related jobs in New York state began to rebound the following year, and leaped even more after the tax credit was tripled in 2008, to rebate fully 30 percent of all "below-the-line" production costs — i.e., not actors' or directors' fees. (Though framed as "tax credits," these are actually cash grants: Production companies can receive more in state subsidies than they would ever owe in state taxes.)

Exactly how much bang state taxpayers are getting for the resulting Niagara of cash flow to TV and film production companies, though, is less clear. The most recent quarterly report available on Empire State Development's website shows that $215.4 million in credits were issued just from April through June of last year. (ESD did not respond to queries about why more recent reports are not yet available.)

Some of the highest ticket items were filming for such shows as The Blacklist (a three-month total of $43,748,065 in state tax credits) and Elementary ($20,634,651 in tax credits); at the other end, National Geographic Channel's Pope v Hitler (described by one of its three Amazon reviewers as "informative with facts") netted just $52,441 in credits. Jeff Bezos may not have gotten his Queens helipad, but Amazon Studios’ Mozart in the Jungle still scored $3.5 million in credits.

All this money is supposed to guarantee jobs, and indeed the film and TV industry does employ a lot of New Yorkers: 47,028 people in 2017, according to figures from the federal Bureau of Labor Statistics' Quarterly Census of Employment and Wages. Of these, a 2017 report for the state by economic consultants Camoin Associates claimed that more than 34,000 had been created as a direct result of the film tax credits.

The BLS data, however, tells a different story. In pre-tax-credit 2004, New York boasted 28,546 film and TV jobs, making the total increase by 2017 just 18,482 jobs — a little more than half what Camoin claimed. One likely reason for the discrepancy: Unlike BLS, Camoin's study counted every project worked as a separate job, no matter how long it lasted; "if you hire an electrician who works on set for three days, that counts as a job," notes David Friedfel, director of state studies for the Citizens Budget Commission.

University of Southern California film-subsidy researcher Michael Thom notes that since the film industry has expanded everywhere in recent years — thanks, Netflix wars — employment would probably have risen somewhat in New York state even absent a change in tax law. But even crediting all of those 18,482 jobs to the tax credits, at $6.4 billion we get a cost ratio of nearly $350,000 per job — more than 20 times the average cost of tax incentive programs, and more than 100 times the price tag per job of a typical state-funded job training program.

And as far as generating overall economic development goes, the film tax credit numbers look even worse. That same Camoin report shows the state shelling out $1,447,915,071 in film credits over the years 2015 and 2016, while bringing in $1,552,161,401 in tax revenues. If even a small fraction of those films would have shot in New York without subsidies — the same "but-for" problem that plagued claims that Cuomo's Amazon gift would have generated more new taxes than it cost — that would mean that New York taxpayers are handing out more to film productions than they're getting back in taxes. 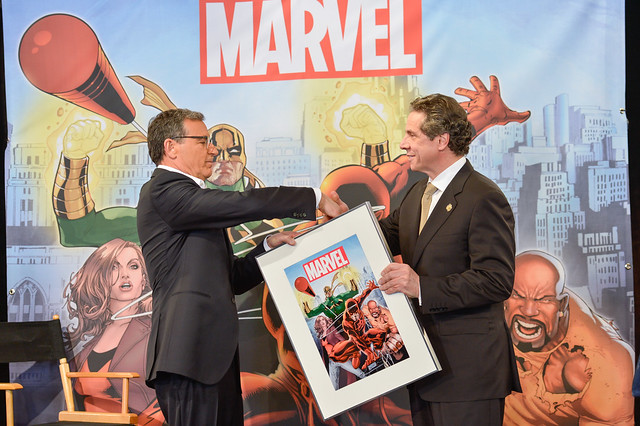 On February 26, 2014, "Gov. Cuomo, The Walt Disney Co, Marvel, & Netflix announce landmark Live-Action TV series based on Marvel Characters to film in NY. Productions will result in hundreds of Millions of dollars in investments and lead to creation of at least 3,000 jobs" (Governor's Office)

It's numbers like these that explain why corporate subsidy experts and budget watchdogs have long criticized state film credits as a waste of public cash. "Every state analysis I've ever seen finds that taxpayers get back only dimes on the dollar from film production tax credits," says Greg LeRoy of the D.C.-based corporate subsidy watchdog Good Jobs First. While many states have repealed their film subsidies — Iowa ended up paying one production company not to film in the state because it figured it was cheaper than handing out tax breaks — in New York, the combination of union backing and an industry that is seen as warmer and fuzzier than Jeff Bezos has led to the program's perpetual renewal.

"Unfortunately, it's a popular industry — the legislators like when a film comes to their town and it gets in the local papers," says Friedfel. "Also, because it's a tax credit, as opposed to direct spending, sometimes it gets less attention just because of that. It has the same net impact on the state's financial plan — it's just coming out of the revenue side as opposed to the spending side."

Not that everyone in Albany has jumped on the film-credit bandwagon. Even as Governor Cuomo was playing political tetherball with the program, state senator Bob Antonacci introduced a bill to eliminate it altogether.

Antonacci's opposition to film credits dates back to his days as Onandaga County comptroller, he explains, when Cuomo spent $14.4 million on a "seriously flawed film hub" near Syracuse that ended up having to be bailed out by the county. He echoes the concern that a large chunk of the film credits are going to subsidize productions that would take place in New York regardless: "You're not gonna say, 'Live from Tucson, it's Saturday Night.'"

Antonacci blames the allure of Hollywood, or at least whatever fragment of it comes along with the filming of National Geographic historical docudramas. "I think people love being in the throes of celebrity," he says. "I think people get all excited about being around stardom, and some of my colleagues lose their minds over that stuff."

Of course, Antonacci is in a firm position to take a stand against film credits: As an upstater and a Republican, he's beholden to neither the largely New York City-based film industry, downstate unions, nor the governor and other Democratic interests. (His press release on his bill to end the credits called for redirecting the money to "create a more business friendly environment statewide or economic development Upstate.") And in any event, as a minority member of the senate, his position is unlikely to have much impact on state policy — his bill didn't even get a hearing.

Still, Antonacci calls himself a critic of "economic development programs that don't prove their worth," saying that he wishes the state legislature would return to Albany outside of its regular session to provide more scrutiny to how the state hands out tax credits.

Does that include, say, Amazon?

"We would love to have Amazon in upstate New York," Antonacci says without hesitation. "It would be a game changer. It could literally create a community from the ground up."

#andrew cuomo
#film industry
#film tax credits
#liz krueger
#original
Do you know the scoop? Comment below or Send us a Tip