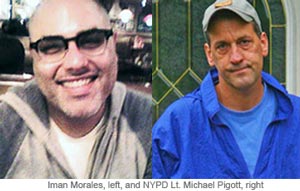 NYPD Emergency Services Unit Lieutenant Michael Pigott, who killed himself yesterday morning, left behind a suicide note noting his remorse and concern over his family. A police source told the Post, "He didn't want his family to see him cuffed up and jailed. The guy felt he disgraced his family."

Last week, Pigott ordered a sergeant to Taser an emotionally disturbed man, Iman Morales, who was standing naked on a storefront ledge in Brooklyn. Though ESU called for an airbag to catch Morales, it hadn't arrived yet and Morales fell on his head, dying at a hospital later.

The incident was caught on tape and the NYPD said it seemed the Tasering broke department guidelines and Pigott was stripped of his badge and gun. Earlier this week, Pigott had publicly apologized and the 21-year NYPD veteran had been receiving department counseling, apparently being told to take "a few days to rest up," according to a Daily News source. The source also said, "He was very distraught and upset what had happened...No one saw this coming. It is very tragic."

Pigott went to Floyd Bennett Field, where ESU is headquartered, and broke into another officer's locker to take a 9mm gun. In the note, Pigott said the Tasering was his fault and was apparently worried about criminal charges. The Post's source says that Pigott "placed photos of his wife and three children around himself and sat staring out the window at Jamaica Bay for some time before taking his own life."

Police Commissioner Kelly said, "On behalf of all the members of the New York City Police Department, I extend my deepest condolences to the family and friends of Lt. Michael W. Pigott, who served with dedication for 21 years," and Mayor Bloomberg also expressed his condolences, saying Pigott's death compounded the tragedy of Morales's death. NYPD and Sayville police officers were stationed outside Pigott's Sayville home, telling reporters to leave, but Pigott's father apparently raged at the NYPD, telling some cops, "My son loved his job. That's all he ever talked about. You people threw him to the wolves."

Yesterday was Morales's funeral. His aunt Ana Dejesus Negraon said, “This is not something we wanted anyone else to go through. This really disturbs the whole family." She said she believed Iman would want them to forgive Pigott and hoped Pigott's family "find[s] peace and healing and trust in life again."

#cop suicide
#death
#iman morales
#Michael Pigott
#stun gun
#suicide
#taser
Do you know the scoop? Comment below or Send us a Tip