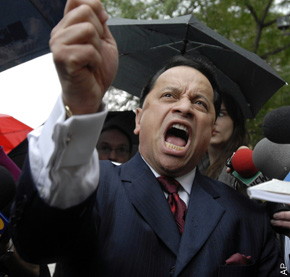 Attorney Andrew Cuomo has sued State Senate Majority Leader Pedro Espada Jr. (D-Bronx) for "looting" Soundview HealthCare Network, the Bronx non-profit, where Espada is the President and CEO. Cuomo's suit claims "Espada diverted Soundview’s charitable assets and used the money for himself, his family, his friends, and his political operation. In the past five years, Espada has siphoned more than $14 million out of Soundview, including an unconditionally guaranteed severance package worth an estimated $9 million which was put into a contract signed in 2005."

Espada's earnings at Soundview had raised interest last year, but there was talk that Cuomo had dropped the probe. Now Cuomo's office lists how working for the non-profit apparently paid off for Espada—more are after the jump, but here are a few:

Cuomo said, "Taxpayer money was given to this not-for-profit to provide healthcare services to underprivileged patients, but our investigation has found the funds flowed into the pockets of Senator Espada and his supporters. Siphoning money from a charity would be egregious under any circumstances, but the fact that this was orchestrated by the State Senate Majority Leader makes it especially reprehensible. In New York, no one is above the law, and this suit should finally make that clear to Senator Espada."

Espada, who is also being probed by the feds and the IRS, has previously said Cuomo's investigation a "witch hunt driven by his political ambitions." Espada is also up for re-election this fall.

Specific examples cited in the Attorney General's complaint, including improper funding of his political operations: