“All these right here, they’re going to be knocked down,” says Staten Island community organizer Dulce Rivera, pointing to a cluster of two- and three-story frame houses on the corner of Bay and Van Duzen streets. A block or so away, she points out a bodega that used to serve $3 breakfasts and is now bedecked with chandeliers.

“They’re blinging it out,” she says. “This is part of the package.”

The area along Bay Street, on Staten Island’s northeast shore beginning just south of the ferry terminal, is probably best known to outsiders as the place where Eric Garner was killed by police in 2014. Contrary to the stereotype of Staten Island as the turf of white homeowners, the adjacent neighborhoods of Tompkinsville and Stapleton are a racially mixed, mostly working-poor area, with numerous Mexican, Liberian, and Sri Lankan immigrants. South of Tompkinsville Park, the streetscape shifts to car territory: strip malls, fast-food franchises, motorcycle dealers, and light-industrial uses like flooring and heating/air-conditioning suppliers. There's also a row of antique shops on Van Duzer Street in Stapleton and the ETG bookstore café on Bay Street, one of the few coffeehouses in the city that still has live music, run by Ganas, an intentional community founded in the ’70s.

Many residents fear that all this may change under a rezoning plan approved by the City Council on June 26. The new zoning will allow buildings up to 13 stories high in a 14-block area along Bay Street, parallel to the waterfront between the Tompkinsville and Stapleton Staten Island Railway stops, that is now predominantly buildings of four stories or less. A stretch of Canal Street in Stapleton was also rezoned, but for smaller buildings than allowed on the waterfront.

The goal, according to the city's plan, is to spur the construction of 1,800 new apartments along the waterfront, 1,350 of them luxury and 450 designated as “affordable” under the city’s Mandatory Inclusionary Housing (MIH) program. Another 850 below-market-rate apartments are supposed to be built on two city-owned sites, one on the waterfront and one about half a mile inland where there’s now a Sanitation Department garage; of those units, 25 to 30 percent would be reserved for households making less than 50 percent of the metropolitan area median income (AMI), about $48,000 a year for a family of three. (The neighborhood’s current median household income is about $43,000, according to Census Bureau figures from 2016, and 35 percent of the households in the project area make less than 30 percent of AMI.)

Community activists and City Councilmember Debi Rose won some concessions from the city’s original plan. The MIH housing will mostly be aimed at people making 60 percent of AMI or less, rather than the city's “workforce option” for those earning up to 120 percent of AMI—in which a $2,760-a-month two-bedroom apartment qualifies as “affordable.” And the city has promised to renovate the Cromwell recreation center and its public swimming pool, largely destroyed by Hurricane Sandy in 2012.

Many residents, however, fear that the new development will price out both them and the businesses they can afford. “It’s totally unaffordable for the people of the North Shore,” says Rivera, who has worked with the Housing Dignity Coalition, an alliance of local clergy and tenant groups.

Gentrification is already beginning to creep in, with new luxury buildings lining the waterfront south of the ferry, over the ruins of the old docklands. The rezoning plan would extend the luxury development to the south.

The de Blasio administration’s Mandatory Inclusionary Housing program essentially relies on enforced trickle-down from gentrification, targeting neighborhoods where land is still relatively cheap but the potential market for luxury housing is strong enough that the city can entice developers to build while requiring 20 to 30 percent below-market-rate units. The administration has argued that where gentrification is inevitable, this is the only way to ensure that affordable housing gets created.

How much the luxury development generated by rezoning stimulates gentrification and displacement can be hard to quantify, even for previously rezoned neighborhoods; it's doubly tough to predict how Bay Street will fare. “It will be hard to distinguish the effects of a rezoning from pre-existing trends, and it will also take a while before we have the data to even try,” says Thomas J. Waters, housing policy analyst at the Community Service Society.

The Tompkinsville-Stapleton area, however, is particularly vulnerable, says Ivan Garcia, Make the Road New York’s Staten Island neighborhood rezoning coordinator: About 85 percent of the rental housing stock is not rent-stabilized, as it's in buildings smaller than six units. That means there is no legal limit on how much rents can be increased, and landlords don’t have to give a reason for not renewing a lease. The city’s draft environmental impact statement, released last fall, estimated that about 1,750 current residents of unregulated housing would be at risk of being pushed out under the rezoning. 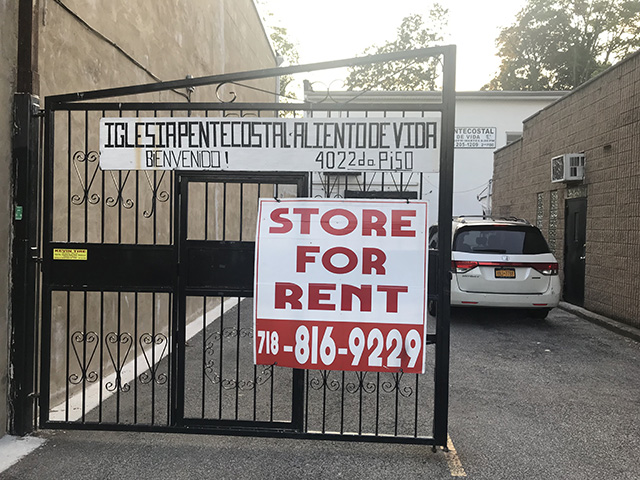 A storefront church bears a "for rent" sign after its owners hiked rents during the rezoning. (Steve Wishnia / Gothamist)

The mayor’s office said June 26 that it will "protect existing tenants through free legal, rental, and financing assistance, help move homeless families into permanent housing, aid low-income homeowners make critical repairs to their homes, and more.” All of these are existing city programs, though not all are available citywide. Free legal assistance for Staten Island tenants, for example, is currently available in only four ZIP codes, none of them in the Bay Street rezoning area; the city is planning to expand it by 2022 to cover anyone with an income of up to twice the poverty level.

“The rezoning points of agreement include a robust package of measures to combat displacement and keep the North Shore affordable for all income levels,” Councilmember Rose told Gothamist in a statement. “As rental prices rise across the city, these measures will help to ensure that the North Shore remains a welcoming, vibrant neighborhood for long-time residents and all who seek opportunities here.” Those measures include free legal assistance for renters, outreach from Tenant Support Unit specialists, tenant resource fairs, and a three-year Certificate of No Harassment pilot program to deny construction permits to landlords the city finds have harassed tenants.

The problem, says Ivan Garcia, is that legal assistance can’t do much to help tenants in unregulated units. Last fall, a report by the city Human Resources Administration on the city’s pilot program to provide legal assistance to tenants facing eviction found that one-third of the 1,800 tenants it aided in Staten Island were eventually evicted, twice the citywide average. The report said this was likely due to “the higher volume of owner-occupied and single- or two-family properties” in the borough.

Garcia says the city will provide 100 temporary rental vouchers for people who are displaced or homeless, though neither he nor city officials could provide specifics.

Along Bay Street on a recent weekday, many residents seemed unaware of the rezoning plan. “What?” replied a pizzeria worker in Stapleton when asked if he knew about it. Hardly any of a dozen pedestrians on Bay Street had heard of it, including an elderly man in a Mets cap and a woman pushing a stroller. A thirtyish, bearded deli clerk on Canal Street said he didn't know about it, but added that housing for people making less than $60,000 a year is “in my category.”

Jim Houlahan, a retired man walking his dog, said he was not familiar with the plan, but thought it would be good for the area. “This is a tough neighborhood,” he said. “A productive use of the land is better than squalor and vacant buildings.” He bought a house 31 years ago through a city program intended to stabilize neighborhoods by encouraging middle-income homeowners, he added, but the area has “never changed.”

“They’re rezoning in such a way that the people who live here are being priced out,” said a dreadlocked grandmother in the ETG Café who gave her name as Ms. Robinson, “the Kwanzaa Lady of Staten Island.”

She and her companions were also concerned about the displacement of businesses. The Key Food supermarket in a new luxury building on Bay Street is too expensive, she says, so “you have to go out of the neighborhood” to go food shopping.

“They closed down all the affordable stores,” says Keyma Abbott.

The Western Beef supermarket on Bay Street is “OK,” says Robinson. But it’s one of the 30 businesses the Department of City Planning listed as likely to be displaced. The city's environmental impact statement downplayed the effect of closing it, saying that area residents could go to Key Food or smaller groceries. A DCP spokesperson told The City in May that “nothing in this proposal will require that they leave.”

“I think it’s an excellent idea,” George Warnock, 54, a building superintendent who lives to the north in St. George, said of the proposed development. “I could work there as a super. I gotta go to the city now.”

But, he warned, “it’s a high-crime area. They’d have to have tight security.”

It is certainly a high-drug-use area: From Tappen Park in Stapleton to Tompkinsville Park, the number of people walking around with the glazed, sluggish aura of opioid use is dramatically higher than it was two or three years ago. A middle-aged white man asked a visiting reporter if he was a cop, poking him in the chest to check for a hidden badge. A ragged-looking man angrily staggered down Bay Street in a “Kill Your Local Heroin Dealer” T-shirt.

Along Bay Street, Dulce Rivera pointed out vacant storefronts, the former sites of a Harley-Davidson T-shirt shop and the Project Hospitality social services center. There was a for-rent sign on the gate outside a two-story building now occupied by two churches, a Latino Pentecostal one upstairs and another downstairs with Liberian and Ghanaian flags hanging across from a poster with a passage from Jeremiah about God’s plan. She said the building’s new owner is asking triple their current rent.

The neighborhood’s working poor are particularly squeezed, she added, as they can’t afford the rising rents but make too much to qualify for social services. She estimates that more than half the people at the food pantry she volunteers at are working, and “some of them have two jobs.”

Garcia says he'd hoped the state Legislature would enact a bill prohibiting evictions without “good cause” in almost all rental units statewide, but it was deleted from the package of rent-law reforms enacted in June. Without any legal protection, he says, there’s no way to stop tenants in unregulated apartments from being pushed out.

“This isn’t the best rezoning, but it’s the best deal we could have gotten with the tools we were given,” he says.

Correction: This article has been updated to clarify that the city's EIS indicated that about 1,750 residents of unregulated housing could be at risk of displacement, not that 1,750 residents would necessarily be displaced total.

#eric garner
#housing
#rezoning
#staten island
#original
Do you know the scoop? Comment below or Send us a Tip