Hundreds of people gathered at a vigil for Jean Chambers, the 61-year-old woman who was killed by a driver while crossing West End Avenue at West 95th Street last week. One attendee yelled, "Make this the last one!" referring to the troubling fact that this is fourth pedestrian death within a few blocks since January.

Chambers's husband John and teenage daughter Maria were there, and John Chambers spoke to the crowd. He described his wife, who was born in Bay Ridge and lived on the Upper West Side for four decades, and also asked for action:

Because of our strong sense of community, you have come out tonight to remember Jean, not as a victim of an accident, but as your loving neighbor. You have also come to voice your support for measures that can prevent more pedestrian accidents. 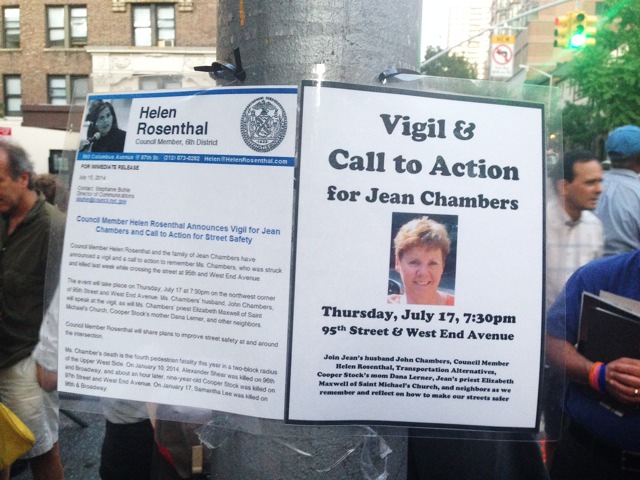 Earlier this year, City Council Member Helen Rosenthal introduced Cooper's Law, which would suspend cabbies who kill or maim pedestrians. It was signed by Mayor de Blasio as part of his first Vision Zero legislation. Today, she outlined the changes the Department of Transportation has been making to West 95th Street and West End, such as adding a sign to tell drivers they are entering a residential zone; prohibiting left turns onto West End between 7 a.m. and 9 a.m. (she's trying to extend that to no left turns all day); and adding another speed hump.

Further, Rosenthal called the deaths an "epidemic" and said that the DOT is receptive to redesigning West End Avenue and she'd work with them on that. She encouraged her constituents to offer suggestions about making UWS streets safer via her website so she can help the city develop a powerful public safety campaign.

Cooper Stock's mother Dana Lerner also spoke at the vigil, noting that Chambers' death happened six months after her son's death. When she saw the police response, "I was feeling anxious and frightened" that something bad had happened, and her doorman told her another pedestrian was hit by a car. Lerner said to John and Maria Chambers, "I hope I can help you. I know the agony."

Lerner also listed the numerous things she's learned since her son was killed. For instance, while pedestrians may technically have the right of way when the light is green, "The rules don't apply here." Cooper had the right of way, but he was still struck by a cab driver making a left turn—"Cooper was following the law"—and the cab driver still hasn't faced any criminal charges. 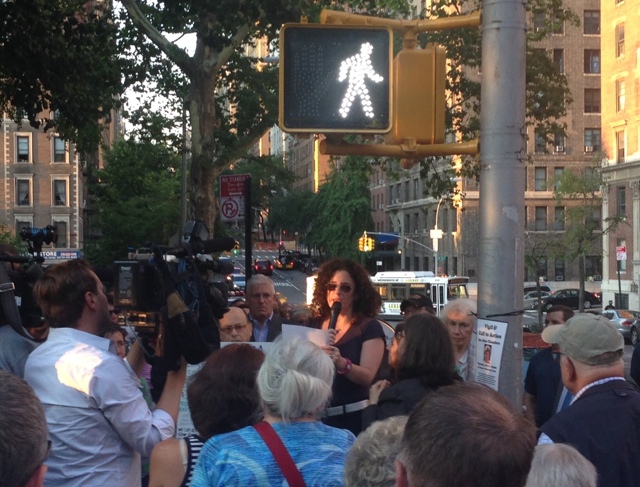 She also said, "The people whose job it is to protect pedestrians" aren't. Lerner said that Community Board 7 and the Department of Transportation have received complaints regarding many Upper West Side intersections, including those on West End Avenue, for years, but never changed anything. "Every day, I wonder what if... what more needs to happen?" Then she pleaded, "Make this the last death we talk about to make us safe."

Most frustratingly, laws like Hayley and Diego's Law—named after two children who were walking on a Chinatown sidewalk when they were fatally crushed by a van driver who jumped the curb—and Elle's Law—named after the 3-year-old girl who was brain-damaged after a driver backed up his car for a parking space—are seldom enforced. Lerner said, "If there was a serial killer on the loose," the cops would take that seriously—but pedestrian deaths don't seem to be a concern for the police or the Manhattan DA's office.

Lerner ended with a tearful message to her son, who was a huge Knicks fan, "Cooper, you were right: LeBron James went back to the Cavaliers. I wish you were here so we could talk about it. I love you so much. I'm doing this for you."

Ex-NY Times executive editor Jill Abramson was also at the vigil. Afterwards, she told us that Jean Chambers had worked at the Times, "I didn't know her personally—I was in D.C. at the time—but I wish I did... [other colleagues] said she was the loveliest person." 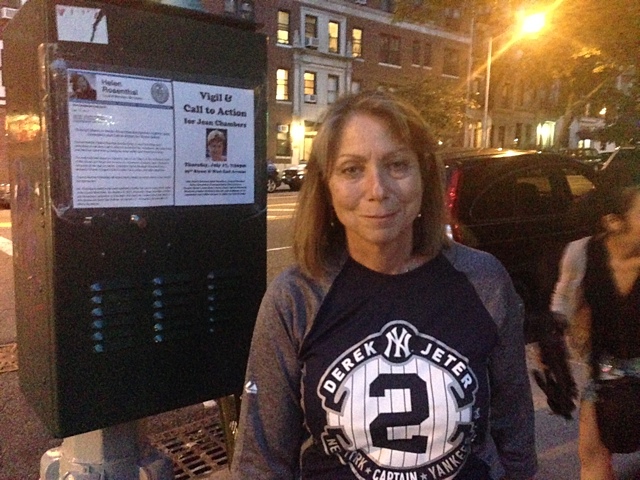 Back in 2007, Abramson was crossing the street at West 44th and 7th Avenue in Times Square when a truck struck her. Though she had the right of way, Abramson wrote in May, "Suddenly and seemingly out of the blue, a food delivery truck came barreling by. Its front tire rolled over my right foot and I was dragged down while the rear wheel rolled over my left side."

Abramson, who grew up a few blocks on the Upper West Side, called de Blasio's Vision Zero efforts "heartening" and was happy that Albany finally agreed to allow NYC to lower its speed limit "at the bitter end" of the legislative session. "But," she said, "it's as Dana said—if laws aren't being enforced," and drivers aren't facing any criminal prosecution, then drivers' behavior won't really change.

When I mentioned that I struggle with how to explain to my pre-school aged daughter that we have to be super careful when we cross the street, Abramson said, "Please promise me that you'll tell her not to step into the street" when the light is red. She shook her head, "I see people, when the light is red, hanging out in the middle of the street."

Thank you for coming tonight.

My name is John Chambers. My wife Jean died at this corner a week ago today.

Jean was born in Bay Ridge Brooklyn in 1953. She graduated with a degree in fashion illustration from The Fashion Institute of Technology and later with a B.A. in English from Hunter College. She lived on the West Side for nearly 40 years. First at a fourth floor walk up on 84th street. Then in a ground floor apartment on West End Avenue. And, since 1984, at the Cliff Dwelling apartment building a block from here, where we moved when we were engaged.

Before devoting all of her energy to taking care of me, our daughter Maria, and our two dogs, Jean was a graphic artist. Her last employer was the New York Times.

Jean touched many lives. Many of you here knew her. Many of you are dog owners too and chatted with Jean during the morning romp before 9 a.m. in Riverside Park. Many of you are neighbors, who have been in our home, or been part of the familiar urban fabric. Many of you are fellow parishioners at Saint Michael’s Church at 99th street, where we’ve gone since just before Maria was baptized in 1996. You knew Jean as a kind, gentle woman, of grace and beauty, with affection for all her friends.

Although I come from Kansas, I’ve lived on the West Side almost as long as Jean had. Coming from Kansas, I know something of small towns. Robert Benchley wrote a story for the New Yorker in the 1930s saying that New York is a series of contiguous small towns, which we call neighborhoods. Once you get settled in to a neighborhood, you tend not to venture out that much. After a while, you get to know people. Maybe not by name but you know they are a local, whether it’s the lady who cleans your shirts, or the clerk who sells you hardware, or the redeemer who picks out plastic bottles from the trash cans. Because we share common space—in our parks, on our sidewalks, in our neighborhood shops—we have a strong sense of community. It fosters social trust. It makes people care for each other. It means that people who may live alone don’t feel alone because they have a regular personal relationship with their neighbors.

Because of our strong sense of community, you have come out tonight to remember Jean, not as a victim of an accident, but as your loving neighbor. You have also come to voice your support for measures that can prevent more pedestrian accidents.

There are also civic measures we can take. Councilwoman Rosenthal has put forward several sensible proposals, which she will explain. Jean, Maria, and I would like to see them enacted.

I would like to close with a few words of thanks. We don’t often think of the many public employees and private individuals who respond in an emergency until there is one. Many of these people I don’t know by name: the individual who alerted the driver to my wife being dragged under his SUV or the person who called 911 for example. I do know the names of the EMS medics: Raul Dawson and Rafael Lopez; the trauma surgery team who fought to save Jean’s life at Saint Luke’s Hospital: Doctors Jordan Sasson, Zeah Venitelli, John Danks, Jonathan Price, Amy Liang, Sanaja Vig. The staff psychologists who were with me when I was told of her death and saw her body: Deborah Travis and Abbe Frank. The Emergency Department team: Doctors Dan Wiener, Antoinette Golden, and Aaron Drake and Nurses Mary Swett, Sheryl Ostroff, Siobahn Frey, Bao Nguyen. The detectives who reviewed this scene: Michael Sharpe and Officers Diente and Zucconi. Carolyn and the folks at the New York Organ Donor Network, who harvested Jean’s corneas so that someone else could see. I would also like to thank Councilwoman Rosenthal and her staff who organized this vigil and have made concrete proposals to make our streets safer. Finally, I’d like to thank all of our friends, many here tonight, who have supported Maria and me with their love in this, the most difficult time in our lives.