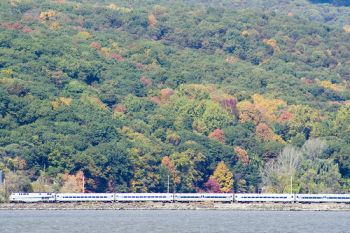 Metro-North has announced a partnership with Enterprise that will likely appeal to anyone who's been gouged by New York City rental car companies. The New York Sun reports that Enterprise will soon have rental cars at 23 Metro North stations in five upstate counties: Westchester, Orange, Rockland, Dutchess, and Putnam. The program has the potential to encourage more budget-conscious New Yorkers to explore points north beyond the Metro North lines.

It's not really much of a bargain for day trippers, though, if our price comparison on the Enterprise website is any indication. Currently, a one day rental of an economy car from Pawling, New York, about 13 miles from the Metro North Dover Plains stop, costs $37.32, tax included. A one day economy rental from the Enterprise location on East 47th Street costs $84.34, but when you factor in the cost of a peak round trip $34.00 ticket to Dover Plains, the savings is only about $13 bucks. But it does seem like a sweet deal for long weekends: a three day economy rental from Pawling comes to $55.96 total, while the same class of car costs $253.02 total from a city Enterprise.

According to the Sun, Metro North had flirted with Zipcar but ultimately opted for Enterprise because “it has offices close to train stations, offers hybrid vehicles, and has agreed to drive commuters to an office if an automobile is not available at the station.” There are no further details yet on the Metro North or Enterprise websites, but the program isn’t set to start until next spring.