This morning the MTA reported "extensive delays" still rippling along the A, B, C and D train lines following yesterday's A train derailment at 125th Street in Harlem. But while many commuters are still attempting to get to work somewhere between reasonably late and extremely late, transit advocates are urging frustrated riders to clear their Wednesday rush hour schedules for a vent session in front of the NYC office of Governor Andrew Cuomo: the man who controls the MTA, despite his recent statements to the contrary.

The Big Guy is in Albany today, according to his schedule.

"Yesterday's A Train derailment followed an F train stuck underground and months of subway meltdowns, broken trains, and delays for riders, with no end in sight," said the Riders Alliance, NY Communities for Change and the Straphangers Campaign in a joint statement Tuesday. "Subway riders will demand a plan and transit funding from Governor Cuomo, who runs the MTA."

Dear @MTA can you plz teleport me to midtown thx pic.twitter.com/5T9qy4dNRA

Governor Cuomo was conspicuously silent on the subway for much of the day Tuesday, following a derailment the MTA has since attributed to an "an improperly secured piece of replacement rail that was stored on the tracks." His office issued a statement during the Tuesday evening commute: the derailment was an "unacceptable manifestation of the system's current state," Cuomo said.

"Regardless of the cause of the derailment, the fact is that riders have come to expect this daily," said Jaqi Cohen, a spokeswoman for the Straphangers Campaign. "The main push is to get Cuomo to make a firm plan to improve the system." 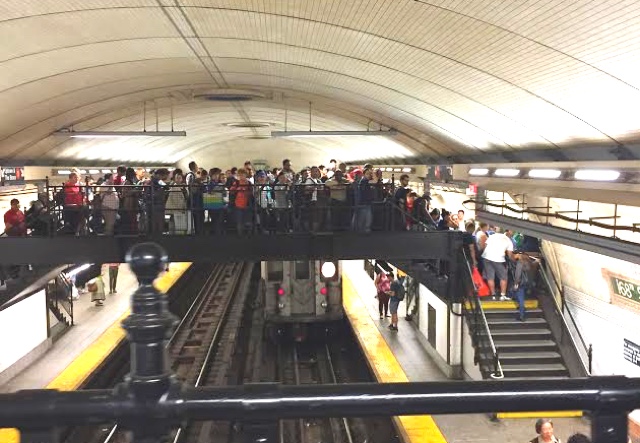 Transit advocates say Cuomo must correct decades of underinvestment in the subway's operating budget, which covers crucial, if un-sexy, projects like signal and track maintenance. While Cuomo often touts his multi-billion investment in the MTA's 2015-2019 Capital Plan, advocates have pointed out that that money has yet to be released. In the meantime, the MTA has taken on billions in debt, in large part to fund Cuomo's pet projects, including airport renovations and cashless tolling.

#anger
#MTA
#rally
#venting
#original
Do you know the scoop? Comment below or Send us a Tip