In April, a group of Crown Heights activists won what some saw as a surprising victory in land use circles: they were granted a motion in state Supreme Court that put a temporary halt on a controversial high-rise development near the Brooklyn Botanic Garden.

Developer Cornell Realty Management had planned to build a pair of 16-story rental buildings at 40 Crown Street and 931 Carroll Street after a hard-fought rezoning effort. Opponents maintained that the project would cast damaging shadows on the Botanic Garden, an argument that has since been raised against another nearby development.

Although the lawsuit against the Brooklyn buildings is still in the early phases, some see the recent decision as one of several cases that are sending a message to those willing to take up the uphill battle against developers. Just last week, in what may be the most significant blow against a high-profile development in recent memory, a Manhattan Supreme Court judge struck down Two Bridges, the mega development along the Chinatown and Lower East Side waterfront comprised of four high rise towers, including an 1,008-foot supertall, and ordered that it undergo a full public review.

"There is a momentum happening in the city, even [within] the court," said Alicia Boyd, one of roughly 10 members of a group called The Movement To Protect The People who are working on the Crown Heights case without the assistance of an attorney.

After her group's recent success, Boyd said she has been contacted by several community groups, including one in Bushwick, seeking advice on how to pursue legal cases against the city and developers.

"I think people are saying enough is enough," she said.

Paula Segal, an attorney who represents five community groups on one of the three Two Bridges lawsuits, said the judge's decision in that case had "disrupted an expectation" among developers who believed they could circumvent regulations.

"The message is that the rule of law applies to people who want to spend a lot of money building big buildings in New York," she said. "In 2019, that is a change."

"You've seen a couple of really high profile instances where the fundamental rules of the land use process are being challenged and changed at whimsy," Jordan Barowitz, vice president of public affairs at the Durst Organization, recently told Politico.

The city's Law Department did not immediately respond to a request for comment. The developers of Two Bridges—JDS Development Group, CIM Group and L&M Development Partners, and Starrett Development—have said they would appeal the decision. 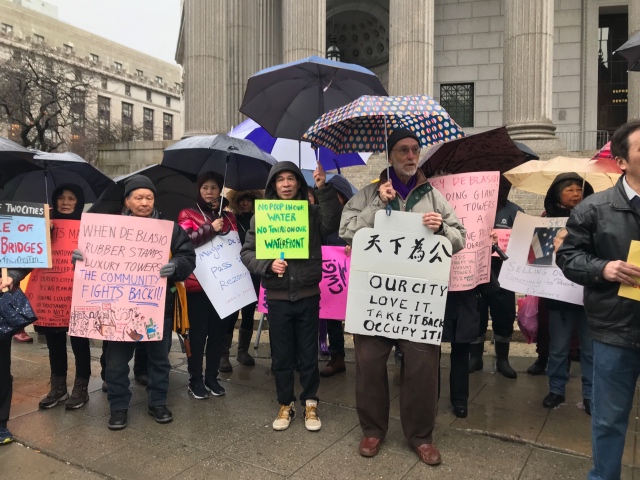 Protesters show up for a press conference on Friday, March 22, 2019, announcing a lawsuit over the Two Bridges development.

Because the courts have historically deferred to the city in land use matters, even incremental victories can make headlines.

In March, when a judge ruled that the city's Board of Standards and Appeals had wrongly issued a building permit for an Upper West Side tower at 200 Amsterdam Avenue, the decision was hailed as a major win even though it failed to include a temporary restraining order on construction. The city was instead ordered to have the project undergo another review, and in June, the BSA reaffirmed its original decision to issue the building permit. The building is now nearly complete.

George Janes, a planning consultant who filed the initial zoning challenge on behalf of one of the plaintiffs in the case, said that regardless of the final outcome, the lawsuit had already succeeded by putting a spotlight on a controversial land assemblage tactic.

The two civic groups who brought the case, the Municipal Art Society of New York and the Committee for Environmentally Sound Development, charged the developers SJP Properties and Mitsui Fudosan with "gerrymandering" because the project's height relied on air rights formed by an irregularly shaped zoning lot that was cobbled together with partial tax lots.

"Even when you lose a specific case, sometimes the residents win," Janes said. "You bring attention to an issue and [the city] needs to address it."

Undaunted by the latest decision, the plaintiffs have since filed a second lawsuit. A spokesperson for the developers called the challenges "baseless" and described the opponents as NIMBYs.

Janes said he viewed the recent slate of state Supreme Court decisions, particularly the case of Two Bridges, as less a sign of a "turning point" in the courts than of overreach by the de Blasio administration.

Citing San Francisco as a cautionary tale, Mayor Bill de Blasio has maintained that the city needs to build its way out of its affordable housing crisis. Both the plans at Two Bridges and in Crown Heights include sizable contributions to the city's affordable housing stock. Two Bridges was slated to have 2,700 new residential units, of which 25 percent, or 690 units, would be below-market rate. Similarly, of the 518 apartments proposed by Cornell, 140 would be designated as affordable.

"If you have a very aggressive administration that means you're ending up with situations that are very specific, which end up in the courts, and then you wind up getting more favorable opinions," Janes said.

In response, opponents of development have increasingly proven themselves to be well-organized and quick to act. Timing is important. John Low-Beer, a land use attorney whose cases include a lawsuit brought by the City Club of New York against Extell's plan to build a 775-foot luxury condo on the Upper West Side, said plaintiffs typically have the best chance of winning when construction has not already begun, which was the situation with Two Bridges.

In that case, not only did the judge grant the plaintiff's motion to temporarily halt the project, he also moved quickly to rule on the merits of the case.

Low-Beer said the longer city agency and court proceedings involving a development drag on while the developer is building, the harder it is for the plaintiffs to win in the end, because the courts are reluctant to order a building demolished.

Attention on a case can also put pressure on the court, according to Boyd, who regularly emails detailed updates to media outlets and community members. The most recent hearing last Friday involved a procedural issue, but as a result of her outreach, the court room was standing room only.

"It makes a major difference," she said. "A lot more respect was given to us."