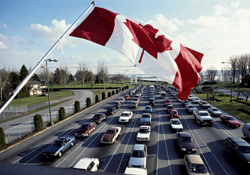 By next June, the Department of Homeland Security will start requiring passports for all border crossings. In order to make it easier for New York drivers, Governor Paterson today announced an “enhanced” driver license [EDL] which will be accepted by border security in lieu of a passport. Paterson says the EDL will “help to ease long lines at our New York-Canada border crossings, allowing commerce to flow more freely and securely in and out of the state.”

The EDLs will be issued some time toward the end of the summer and cost $30 more than non-enhanced licenses. But they’ll still cost less than a passport, which is now $97 for adults. To get the new IDs, drivers will have to show more identification than a standard license, as well as proof of citizenship . Use of the EDL is voluntary for now – though it’s only a matter of time before the IDs are “enhanced” with subcutaneous microchip tracking implants.

New York now joins Washington as the only other state to offer an EDL; theirs has a radio-frequency identification (RFID) tag that's read remotely as drivers approach the border. Last fall, in happier times, disgraced former governor Eliot Spitzer dropped his push to let illegal immigrants obtain driver’s licenses. He had included the EDL as a part of the legislation, but that was the only part of his plan to be revived by Paterson today.

#border
#canada
#edl
#enhanced driver license
#id
#license
#new
#real id
Do you know the scoop? Comment below or Send us a Tip
A new Gothamist is coming! We’ve moved comments over to our beta site. Click here to join the conversation and get a preview of our new website.