Endorsing Clinton May Cost Pols Up for Re-election 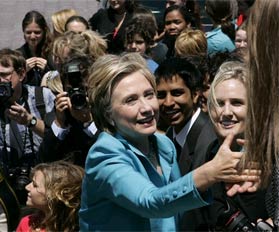 A year ago, supporting Senator Hillary Clinton's bid for the White House seemed like a no-brainer to a number of people, including elected officials in New York. But now, after a bitter campaign that saw Senator Barack Obama end up the victor, many of those Clinton supporters are being targeted by challengers in this fall's elections.

The NY Times looks at how some constituents are unhappy with officials for standing by Clinton, especially Representative Edolphus Towns who has held his position for 25 years. One Bedford-Stuyvesant resident says, "His decision not to back Obama shows he is out of touch with his constituents." According to the official count, in Towns' district, the 10th Congressional, Obama got over 52,000 votes to over 37,000 for Clinton.

And an East New York woman said she believed Towns continued his support for Clinton, even after questionable comments, because of "racial self-hatred....It was as if they were saying: ‘We people of color are not ready yet. We’re not ready to be in the White House.’ Self-hatred does that to you.”

Towns explained, "Hillary Clinton represents New York State, and I’ve worked together with her on many projects.” He also told the Times there's not much time between now and September, when the primary is held--community organizer and Real World (first season) alum Kevin Powell is running against him.