End of the Line For 'Top of the Rock' Subway Announcements 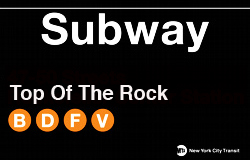 Subway conductors no longer have to hype the Top of the Rock observation deck when they pull into Manhattan's 47-50 Streets Rockefeller Center Station. Back in October 2006, we wrote how conductors had been instructed to append the attraction "Top of the Rock" to the actual station name. An MTA sokesman said the announcement was just a courtesy to let riders know about the attraction, but the co-owners of Rockefeller Center, Tishman-Speyer, decided to remain mum on the announcements.

According to the Daily News, the directive to hype the tourist destination was a favor that real estate developer Peter Kalikow, who was chairman of the MTA at the time, granted to the owners of Rockefeller Center. Initially, they wanted the entire station re-named just Top of the Rock, but Kalikow offered the required advertisements by conductors as a compromise.

Conductors reportedly didn't care for the plugs because they generated all sorts of questions from confused or curious tourists about what the Top of the Rock was, and they're supposed to stick to scripted announcements, although we enjoy when conductors add a personal touch. Supervisors, however, were instructed to monitor whether conductors were following through with the unprecedented PA system commercials. In 2004, the MTA quietly solicited marketing companies for ideas regarding corporate naming rights for stations in order to cover a fiscal deficit.

A vice president with the Transit Workers Union applauded the change. "We didn't think it was appropriate. We pass a lot of landmarks and popular places, and we don't advertise them or call them out. We don't announce 'Joe's Pizzeria,' this place or that place."

#An MTA
#daily news
#manhattan
#MTA
#news
#peter kalikow
#real estate
#rock
#rockefeller center
#subway
#top of the rock
#transit
#TRANSIT WORKERS UNION
Do you know the scoop? Comment below or Send us a Tip
A new Gothamist is coming! We’ve moved comments over to our beta site. Click here to join the conversation and get a preview of our new website.