Mad Men Mystery Solved: Here's The "Thing" That Happened In Bed-Stuy In 1966

In last night's Mad Men Don's new secretary Dawn attempts to sleep in the office after it gets too late. She explains to Peggy her family doesn't want her taking the subway at night, and that cabs won't go north of 96th Street. When Peggy asks if there had been another riot, Dawn says no, but there was "a thing in Bedford-Stuyvesant." We got in touch with the New York Public Library, where showrunner Matthew Weiner even turns to for his research, to find out if they had more information on what this "thing" was. 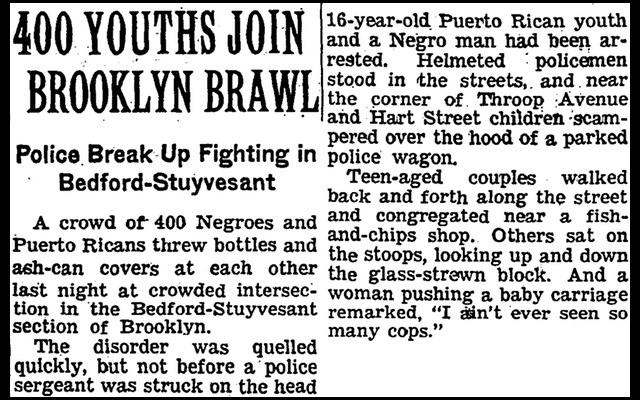 On July 9th, 1966, the NY Times ran an article with the headline: "400 YOUTHS JOIN BROOKLYN BRAWL: Police Break Up Fighting in Bedford-Stuyvesant." They reported:

A crowd of 400 Negroes and Puerto Ricans threw bottles and ash-can covers at each other last night at crowded intersection in the Bedford-Stuyvesant section of Brooklyn. The disorder was quelled quickly, but not before a police sergeant was struck on the head by a bottle and an angry throng rocked a patrol car, attempting to turn it over. There were two arrests.

By 11 p.m. the four square blocks around the intersection of Throop Avenue and Hart Street were saturated with 100 policemen, many of them members of the elite Tactical Patrol Force. They had been called in from duty in Manhattan and the Bronx.

The disorder started, the police said, as an outgrowth of recent hostilities and skirmishes between Negroes and Puerto Ricans in the area. One resident, a Puerto Rican, said the fight started after a Puerto Rican boy called a Negro boy a "nigger."

Police had been getting reports of Molotov cocktails at 675 Willoughby Avenue just minutes before reaching the Throop Avenue scene, where they found "a half-dozen fist fights" going on, and bottles being thrown. One officer told the paper, "I was really scared, they were like wild people." 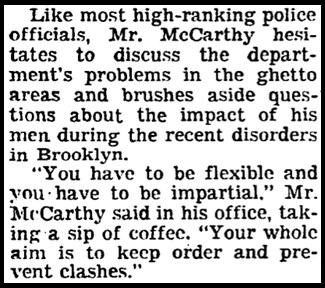 On July 15th there was an article with the headline: "BROOKLYN POLICE GET AID IN BRAWLS: Scattered Fighting Reported City Bus Is Stoned." This one noted, "Additional policemen were sent to the Bedford-Stuyvesant section of Brooklyn early this morning following reports of several incidents of minor violence. Earlier, Mayor Lindsay made surprise visits to the troubled areas of Bedford-Stuyvesant and Coney Island, where fighting had broken out among teenagers over the weekend. The Mayor enlisted neighborhood youngsters in an impromptu street clean-up during a 90-minute tour of Bedford-Stuyvesant." They go on to write, "In one of last night's incidents, a city bus was stoned and several passengers were slightly injured by flying glass. Two store windows were broken in other incidents and a large, disorderly group was dispersed on Bedford-Stuyvesant." The Coney Island incident mentioned was also reported on, on July 14th, when the Times noted that "eight negroes filed complaints of police brutality in connection with the bottle-throwing brawl in Coney Island Tuesday night." 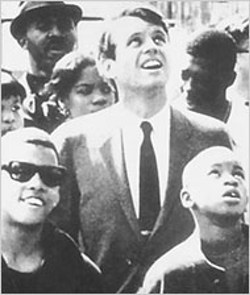 Meanwhile, Robert Kennedy had taken an interest in the neighborhood in the 1960s, when one of the first urban riots (in 1964) took place there following tensions over charges of racism in schools as well as the police force.

By 1965, a lawsuit under the Voting Rights Act had been brought charging racial gerrymandering; claiming that Bedford-Stuyvesant was divided among five congressional districts, each represented by a white member of Congress. The suit later resulted in the creation of New York’s 12th Congressional District and by 1968, the election in of Democrat Shirley Chisholm, the first black woman ever elected to the U.S. Congress.

In 1966 Kennedy visited Bedford-Stuyvesant, which at the time had a population of 450,000 (82% African American and 12% Puerto Rican); during his walking tour he saw burnt out buildings, vacant lots, littered streets, and abandoned vehicles. While Kennedy was meeting with community activists, he found some cynics, who told him: “You’re another white guy that’s out here for the day. You’ll be gone and you’ll never be seen again. And that’s that. We’ve had enough of that.”

Ten months later (in December of 1966) Kennedy, along with Mayor Lindsay and Senator Javits, presented a plan for the Bedford-Stuyvesant Development and Service Corporation—he told residents, “The program for the development of Bedford Stuyvesant will combine the best of community action with the best of the private enterprise system. Neither by itself is enough, but in their combination lies our hope for the future.” Today it's known as the Bedford-Stuyvesant Restoration Corporation.