The Real Deal (via Brownstoner) is reporting that, according to a recent court ruling, the city is taking two Williamsburg properties via eminent domain for Bushwick Inlet Park. The properties are located along the East River between North 9th and 10th streets. According to one real estate expert, the city will only pay about $100 per square foot, compared to the $200 per square foot it could garner on the open market, even though the owners are entitled to the fair market value. The Real Deal doesn't delve into why.

Other area properties on the eminent domain chopping block, including the Greenpoint Monitor Museum (its president called the taking a "disgrace.") The city has offered to make the property part of a park and to relocate the museum off the waterfront to an undetermined street. We hate to say it, but the park actually looks sort of pretty, according to the above rendering. 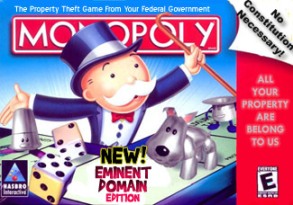 It's no secret that there's been an increase in use of the eminent domain power. High-profile projects that have resorted to it include Atlantic Yards, Willets Point in Queens, the Second Ave. subway project, the New York Times Building and Columbia's Manhattanville campus (although the university later renounced its use). All these takings have spawned a new term: eminent domain abuse.

This month, the city actually abandoned a plan to use eminent domain to secure properties for a parking garage and public plaza on a Duffield St. block in downtown Brooklyn - due to a technical oversight. Some of the homes were abolitionist homes involved in the Underground Railroad. While preservationists declared a victory, we're not really sure that the city is going to run away from this one just yet. In other words, another "blight" determination could be just around the corner.

Last week a federal appeals court heard arguments in the lawsuit filed by Atlantic Yards opponents, who claim the taking of their properties is not for public use, but, rather, to benefit a private developer. The suit was dismissed earlier this year, but plaintiffs want it reinstated. Atlantic Yards Report's Norm Oder also has a detailed round-up in today's Downtown Brooklyn Star.

Eminent Domain Monopoly graphic from Six Meat Buffet; if only it were a real game

Update: According to Raul Rothblatt of Duffield St. Underground, the "city is not abandoning its use of eminent domain on Duffield Street. They made a mistake in the Eminent Domain Procedure Law, and they have to resubmit the plans, but they have plans to proceed with the destruction of the 1840s homes."