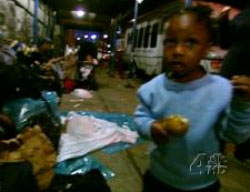 The city changed its emergency shelter policy yesterday at 5PM, vowing to turn away homeless families who had previously been deemed ineligible (because they could, potentially, stay with relatives or a friend).

Previously, if a family went to the PATH office after business hours, they could be given emergency shelter for the night - and could reapply the next day. Some families seemed to rely on this opportunity and the city had claimed that a small group of families with alternate housing options had abused the system. But City Councilman Bill DeBlasio said, "For someone to keep coming back to that office and sitting for hours on end, that's not someone playing a game, that's someone who doesn't have an option."

WNBC has video of families getting anxious about the new policy. One woman laments that she's 6 months pregnant and can't be turned out on the street because that's how she lost her baby last year. And via the Coalition for the Homeless, which criticizes the new policy for allowing families to go into dangerous situations, look at this video of a family given housing by the city's homeless services agency - housing with ridiculous violations. When the My9 News crew tries to speak with NYC Homeless Services Commissioner Rob Hess, he runs away.