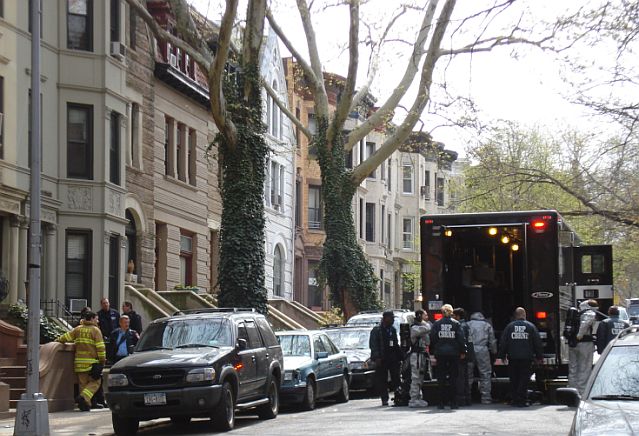 One Park Slope resident emailed us to describe a surprising scene unfolding this morning on 4th Street between 6th and 7th Avenues.

I went out for my coffee around 10am and there were 4 white undercover SUVs, an NYPD emergency truck and a large, black DEP/HAZMAT truck/mobile unit parked on my street! When I came back from my coffee run I saw a Fire Dept. SUV parked at the 6th Ave end of the block and a car from the Office of the Chief Medical Examiner… A moment ago I saw a few passersby noticing the high volume of vehicles and they pulled out phones and cameras. Someone in the Medical examiner's car honked the horn and shouted out "no pictures." I asked the people from the ME's car what was going on, but they said they couldn't say anything and that I should call the 78th Precinct for more info…There's also an ambulance now.

The 78th Precinct tell us: "An unidentified liquid has been removed from a residence. Nothing to be worried about." The officer declined to elaborate further, and the street is currently blocked off.

UPDATE: According to the NYPD, the incident in Park Slope this morning involved one fatality: 65-year-old Robert Siegel, whose body was found by his wife. The DEP tested the toxic liquid and determined the substance to be cyanide. Police say they do not suspect criminality at this time.

#4th Street
#brooklyn
#emergency
#fdny
#hazmat
#nypd
#park slope
#police
Do you know the scoop? Comment below or Send us a Tip