"Can I help you with pest control?" a man in front of the Global Pest Control table asked the fedora-wearing fellow passing by.

The two were part of the crowd filling a subterranean hall inside New World Stages, the Off-Broadway home of the raunchy New York real-estate musical Avenue Q. It was mid-morning, Jimi Hendrix was filtering in through the sound system, and the passageway was lit up orange and purple.

"Thank God I don't have so much pests," the man answered. "Like, tenant pests?"

The theater had opened its doors on this particular Tuesday morning for a symposium put on by the professional networking group LandlordsNY. In attendance were not the Durst family or functionaries from Glenwood, the developer and political donor at the center of the prosecutions of former Assembly Speaker Sheldon Silver and former state Senate leader Dean Skelos, but a few hundred mid-level landlords, property managers, real estate brokers, and vendors like the pest guy. LandlordsNY claims 1,650 members who together control 600,000 apartments.

I paid the conference a visit to get a sample of what these people are saying to one another, and so when I heard the "tenant pests" remark, I pulled the man in the fedora aside to see what he meant by it. He turned out to be an affable guy named Gideon Blumenthal, a commercial property manager hoping to get into the residential management game. He explained that the "pests" he referred to are what he called "professional tenants."

"That in the landlord community refers to somebody who doesn't pay rent and basically lives for free as a profession, and is very good at it," he said, noting that such tenants use free legal services made available to poor people by charities. "Unfortunately a lot of them take advantages of systems that are set up for people who are legitimately down on their luck."

He decried the housing court system as "skewed toward tenants" and said that property owners struggle, too, what with the rising costs of repairs, utilities, and taxes.

"It's not just us swimming in big pools of money and laughing at our tenants," he said. 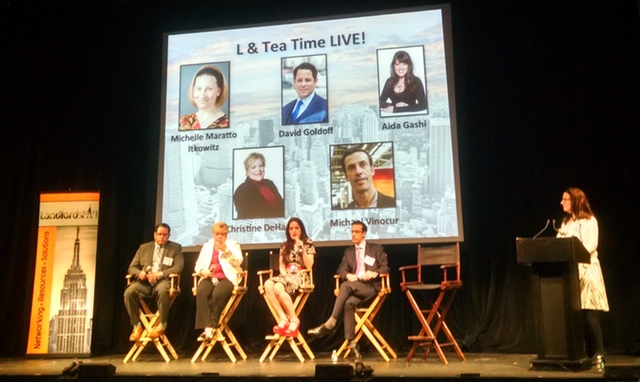 Landlords and property managers share tips on such topics as, "Is it possible to get too close to your tenant?" (Nathan Tempey/Gothamist)

He was not alone in these points. Panelist David Goldoff, owner of Camelot Realty Group, also raised the specter of the professional tenant, just before sharing a story about how he handled a leak in a multimillion-dollar Gramercy Park townhouse apartment owned by a Colombian woman who, in five years, has never lived there. In the hall, another property manager in attendance, Rick Elezi, president of REM Residential, bemoaned the "liberal judges" in housing court and the de Blasio administration, which he described as "totally anti-landlord," citing the mayor's advocacy for freezes on rent-stabilized apartments and erasing rules that allow landlords to deregulate apartments.

Nevertheless, the opportunities to make money in New York real estate are, as Blumenthal put it, "pretty much endless, in all five boroughs." Despite the victimhood expressed by lobbying groups such as the Rent Stabilization Association, and echoed by Elezi, a supporter, someone drinking from a miniature water bottle in that venue was making a lot of money, and it wasn't me. Likewise, people's actions— not the concept commonly referred to as "the market"—are responsible for the current affordable housing crisis in New York, where the median rent is 58 percent of the median income, and more than half of renters pay more than a third of their income towards housing.

One small piece of the crisis is real estate firms trying to give whole neighborhoods new names like "ProCro," something REM's marketing department thinks is a great idea. Here's the company's Aida Gashi, speaking on the same panel:

You've got a lot of out-of-towners, young professionals that are moving from Ohio or whatever, and you just tap on this trendy new name like "SoBro" or—I don't even know how to pronounce it—"Fi-Die" or "Fi-Dee" for Financial District. Even Williamsburg now is "Billyburg." And people are attracted to that. Of course you have the other sector that says, "Oh, our neighborhoods are gentrifying." But you know, that's part of the trend now: Give the neighborhood a cool name.

I asked Gashi to elaborate afterward and she had this to say:

It's cool to say that you live in SoBro or FiDi or the next up-and-coming neighborhood. If you remember a few years ago, Williamsburg was a mess. It was like an industrial lot, and now it's the hipster haven.

Indeed, Williamsburg was barely habitable way back in 2012.

Of course there are other, less hilarious and more sinister practices in the real estate industry, like rent-stabilized landlords purposely not cashing tenants' checks then evicting them for nonpayment, or sabotaging their apartments to make them uninhabitable, or, as New York magazine documented today, buying out black tenants and property owners in Bedford-Stuyvesant at below-market rates to move white people in. Elezi and Blumenthal condemned this kind of behavior, but there was a glimmer of it during a Q&A period of the panel when an employee of Katz Management shared an anecdote about how using a broker protected the company from a discrimination lawsuit. The broker, the man said, added a layer of armor from legal liability, but "[understood] what we're looking for."

And so, among real estate professionals who aren't showing up in federal criminal complaints or getting arrested for harassment or bribery, professionals who make up the vast majority, this is what we're left with. There are sympathetic characters like Joyce Reid who lives in a three-unit building she owns in Bed-Stuy and said she isn't looking to charge $5,000, just to keep the place clean and safe and make a little money. But there are also property owners and managers and middlemen who are looking to squeeze the most value out of buildings that people depend on for shelter by trying to, as REM puts it on its website, "legally decontrol apartments, utilizing creative measures," and "capitalize on every increase and tenant charges [sic] permitted." There are also people who might boast about beating a discrimination lawsuit or casually refer to tenants as "pests."

#affordable housing
#harassment
#housing crisis
#landlords
#landlordsny
#rent regulation
#original
Do you know the scoop? Comment below or Send us a Tip