On Tuesday, the entire Internet found itself submerged in a scam of truly astonishing proportions, one rife with twists and turns—such as actress Felicity Huffman's incriminating use of Scooby Doo tagline "ruh ro!"—that allegedly implicates dozens of fancy helicopter parents nationwide.

Naturally, the scandal did not exempt New York City's elite: A beverage baron, a fashion CEO, and an attorney at one of the city's preeminent law firms have all been swept up by the dragnet.

The local scammers implicated in what the FBI has dubbed "Operation Varsity Blues" are, allegedly, Gordon Caplan, co-chairman of Willkie Farr & Gallagher; Gregory Abbott, CEO of food and beverage packaging company International Dispensing Corp.; and Marcia Abbott, who used to serve as CEO of a clothing company. They list among the 32 parents charged with conspiracy to commit fraud, for allegedly enlisting sham college prep services to boost their children's chances of getting accepted to highly selective schools.

Typical tactics allegedly included arranging exclusive spaces for the kids to sit the SAT and ACT, having special proctors correct their answers after the fact; bribing coaches; and faking athletic excellence by Photoshopping pictures of these underachieving rich kids' heads onto stock photos of people playing sports. Parents payed tens of thousands to millions of dollars for the privilege of presenting heavily varnished images of their allegedly well-rounded spawn—brains and brawn, as it were—that would surely crumble as soon as the teens set foot on Yale's campus.

Safer, some would say, to funnel that money into a new library for the institution of your choice, but then, when your last name features prominently on a building, I suppose it's harder to argue that your gifted child got there all on their own merit.

What specifically did the NYC defendants allegedly do? So glad you asked. According to court documents, federal investigators captured audio of Caplan on the phone with "Co-operating Witness-1," presumably William Rick Singer, founder of for-profit college prep company The Key, and of The Key Worldwide Foundation, the charitable front set up to disguise customers' payments as tax-deductible donations. 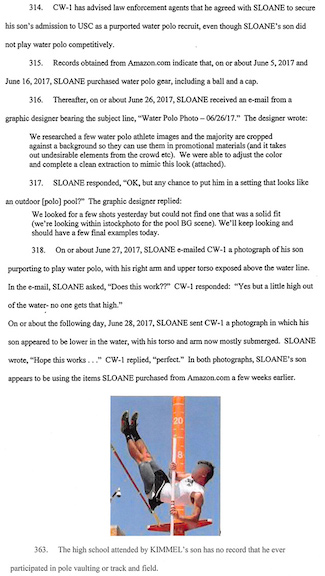 Your kid's face here. (via the FBI's indictment)

"This is absolutely unheard of, to make this happen," CW-1 allegedly cautioned, nodding to his fee. "I can make scores happen, and nobody on the planet can get scores to happen. She [Caplan's daughter] won't even know that it happened. ...I can do anything and everything, if you guys are amenable to doing it." Clarifying that he had zero qualms about "the moral issue" with the scheme, Caplan allegedly agreed to pay $75,000 for a proctor to raise his daughter's score from a projected 22 to something in the 30-to-32 range.

The Abbotts, meanwhile, allegedly conspired to get their daughter into Duke University, for which she needed minimum SAT section scores in the 700s—well above her highest scores in the mid-600s—and ACT scores around 33. Prosecutors say the Abbotts paid $50,000 for ACT scores that came out at 35, and $75,000 for a perfect 800 on the math and a 710 on the literature portions of the SAT.

In an August call discussing the cost of the subject tests, according to court documents, CW-1 explained the pricing discrepancy: "It's a little more expensive because now you gotta ... make sure you do well on both of those areas." In a follow-up call in September, Marcia Abbott allegedly agreed to move forward: "She's convinced she bombed the lit because she was too tired, so...And [Duke University] told us they didn't want anything below a 750." After they confirmed a test location and date later that month, CW-1 allegedly promised, "We'll get 750 and above."

"That's fabulous," Marcia Abbott replied, according to the court documents.

Some parents named in the indictment allegedly went farther than that. Former Full House star Lori Loughlin and her designer husband, Mossimo Giannuli, for example: They allegedly paid $500,000 for The Key to get their two daughters—one of whom is a YouTube vlogger, and neither of whom have ever participated in rowing—into the University of Southern California as crew recruits, via the aforementioned Photoshop rouse. Prosecutors say Desperate Houswives' Felicity Huffman also paid tens of thousands of dollars to have The Key inflate her older daughter's SAT scores, but abandoned the scam for her younger daughter.

If all of this strikes you as prime fodder for televised drama, it may interest you to know that Singer did once pitch a version of his plot as a reality TV show. No one bit, which I guess is how we ended up living this fiasco in real time. That, and all the entitled oblivion money can buy.

#act
#college cheating scam
#fbi
#sat
#scams
Do you know the scoop? Comment below or Send us a Tip