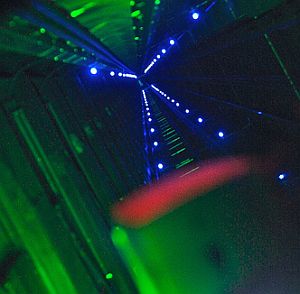 Sure, it’s not as sexy as last week’s 11 page George Clooney spread (what is?), but the article on elevators by Nick Paumgarten in the current New Yorker makes for a fresh read. It begins with the story of one Nicholas White, a former production manager at Business Week who got stuck in an elevator at Rockefeller Center while at work one Friday night in October, 1999. White’s distressing tale is teased out as a counterpoint to Paumgarten’s exhaustive look at the state of elevator art: only after 7,800-plus words does he reveal White’s fate.

Along the way, Paumgarten goes "elevator riding" with experts and learns some interesting facts about the under-appreciated conveyances that number 58 thousand in New York City and make thirty million trips every day. An average of twenty-six people die in (or on) elevators in the U.S. every year. (Most of those are elevator workers.) The Otis Elevator Company, the world’s oldest and biggest elevator manufacturer, claims to carry the equivalent of the world’s population every five days. Most of the 'close door' buttons are inoperable. And unlike escalators, you can wear Crocs in an elevator without fear, though gruesome accidents do happen and a three day imprisonment isn't unheard of.

Paumgarten also looks to the elevator of the future, which will expand on existing technology like the kind at the Times Square Marriot Marquis and at 7 World Trade Center, where “destination-dispatch system” reads your room key or I.D. card and assigns you to an elevator – without buttons – that automatically whisks you to your floor. James Fortune, who did the Marriot elevators as well as five of the world’s ten tallest buildings, says “the next phase of this is face-recognition biometrics.”

Photo from elevator going to Top of the Rock by Skaines.

#Article&
#elevator
#magazine
#new yorker
#Nicholas White
#Nick Paumgarten
#story
Do you know the scoop? Comment below or Send us a Tip