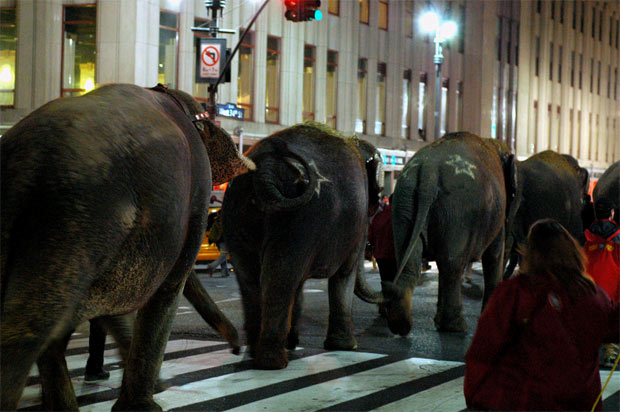 Photograph of last year's Elephant Walk by FlavaDave on Flickr

If it's March, it must be time for the Ringling Bros. and Barnum & Bailey Circus to come to town. And it must mean it's time for the annual Elephant Walk, too! This year's Elephant Walk will take place will be on Tuesday, March 18 into Wednesday March 19th, at midnight. The circus reaches New York City by way of train, stopping in Queens and head into Manhattan through the Queens-Midtown Tunnel for its stand at Madison Square Garden, so anywhere along 34th Street, between the tunnel and Manhattan Square Garden, is a spot where you can see the elephants. (The hardcore people sometimes convene around the exit at 35th Street and 2nd Avenue.)

Unloading will occur before midnight on Tuesday, March 18, and the elephants, other animals and circus performers are expected to start the walk at midnight (it's been late in years past, so be prepared to wait). The walk also becomes a stage for animal rights activists to protest the treatment of circus animals. Last year, we took video; John Philips, executive director for The League of Humane Voters said, "Not even the Bronx Zoo can provide for elephants' needs, why should we expect that Madison Square Garden can?"

This year's circus theme is "Over the Top," with a double decker trapeze, Bengal Tigers, and motorcyclists in the Globe of Steel. The first show is on March 20 and the circus is in town until April 6 (ticket info here).

#circus
#elephant walk
#madison square garden
#Ringling Bros. and Barnum & Bailey Circus
Do you know the scoop? Comment below or Send us a Tip