This morning I test-drove a brand new item on an ever-expanding menu of New York transportation options: a shiny electric moped made available by Revel Transit, a company based in Bushwick. Starting today, they have begun placing 68 of these Torrot-brand scooters around a pilot zone encompassing most of Williamsburg, Greenpoint, and Bushwick.

Revel follows the car2go model: you open an app to find the nearest moped, and you can drive anywhere in Brooklyn or Queens, as long as you eventually return it to a legal spot somewhere within the zone—and you can park perpendicular to the curb, so finding a spot shouldn't be that hard.

I found the sign-up process straightforward: anyone with a valid driver's license can download the app, type in their driver information, give a credit card for the required $25 signup fee, and begin driving within 24 hours. Plus the first two rides are free. It took about two hours for the required background check to be completed, and I was good to go (you won’t get approved if you have any DUIs or other significantly bad infractions in your driving record). Of course, there was still the matter of learning how to actually operate the machine: Revel requires that anyone who hasn’t driven a moped in traffic complete a free 20-minute training course at their headquarters in Bushwick (there’s also a safety video on Youtube.) During the press preview I got a compressed version of that course.

Once you reserve a scooter, you can pop open the small trunk to remove the required helmet (there are two sizes to accommodate most heads, along with a couple of disposable hairnets if you don’t like the idea of sharing a helmet with other riders). The next step is to roll the moped off its parking stand, a straightforward rocking movement I mastered after a few tries.

Then you just sit down, turn on the throttle, pump the hand breaks once, and you’re ready to set off. I’m an experienced bicyclist, but I don’t have much experience with scooters. Still, I found it straightforward to drive up the block. According to the Revel employees standing nearby, each of them was able to achieve driving competence after just a few rides.

While the mopeds have a 50 mile range, they are considered Class B vehicles, which means you’re not allowed to ride them on expressways or other high-speed roads. You probably wouldn’t want to—their maximum speed is only 29 miles per hour, more than enough for the 25 mph speed limit on most New York streets, and enough to get you over smaller bridges like the Pulaski into Queens, but not something you’d want to try on the Williamsburg Bridge. Revel makes sure you won’t try to do that by imposing fines for taking the moped places it’s not supposed to go.

Revel intends the mopeds for use on intraborough trips of around three to four miles which is about twice the average for Citi Bikes, whose service Revel intends to complement. The pricing is set accordingly: $4 for the first 20 minutes, which should be enough for a four mile trip, and $.25/minute after that, so if you drove for an hour you’d be looking at a $14 charge. If you want to drive to a destination and get out, you can park and lock the scooter for $0.05/minute ($3/hour), so it’ll be there when you get back. The rental fee includes liability insurance in case you’re in a crash, and Revel will handle keeping all the batteries charged.

The pilot program will continue through the winter. After that, Revel will decide whether to expand to other neighborhoods. The company hopes to attract customers during 2019’s L Train shutdown, as a convenient mode of transport to other subway lines. According to Revel's founder, Frank Reig, Paris and Berlin already have “several thousand” mopeds on the streets—Brooklyn could certainly use that many or more to help move the 225,000 people that ride the L-train every day to other options. 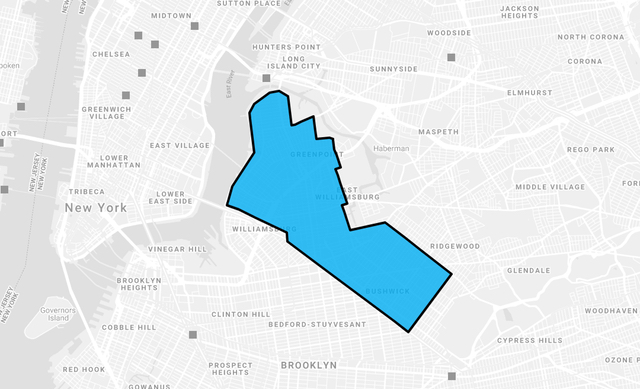 Whether the city would allow thousands of shared mopeds on the streets is another matter. Currently the DOT has not objected to Revel’s pilot, and the company has licensed its vehicles through the state and tried to build relationships with the local police precincts and politicians. What happens next will depend on the appetite Brooklynites have for operating scooters, and how they behave once they do. Unlike the much smaller electric scooters currently overrunning cities on the West Coast, these mopeds are large, 200 pound machines that will need to be operated carefully and parked correctly if Revel wishes to avoid serious pushback.

Still, in terms of the environmental impact, the amount of space they take up, and their danger to pedestrians, mopeds are an order of magnitude better for the city than private cars, and everyone who longs for a less traffic-choked city should wish them luck with their trial.