The city Board of Elections has discounted about 90,000 of 121,000 affidavit ballots cast by voters who workers couldn't find on voter lists during the presidential primary last month, according to results certified by BOE commissioners on Friday. The commissioners signed off on the results after county election office administrators took turns proclaiming that, except for a sole instance of poll worker error in the Bronx, there were no "discrepancies" in the voting process.

But there were other discrepancies. The brisk questioning of administrators was broken up between two days because the Manhattan office administrators failed to show up on Thursday. That Thursday session ended with the announcement that commissioners had suspended a second clerk in charge of the Brooklyn office over registration irregularities that were apparently due to a purge of the rolls there.

BOE meetings last week and the week prior were also bookended by the objections of good-government groups and Bernie Sanders supporters, who are unswayed by assurances that ballots got a thorough accounting.

Primary Day was the stage for a variety of mishaps such as missing voter lists, missing ballots, broken ballot machines, improper instructions, and the poll worker who gave out ballots for the wrong election district—the only error the BOE has directly acknowledged in the whole process.

But the primary was also plagued with reports of voters—first-time registrants who had met relevant deadlines as well as regular voters with steady addresses—who found themselves listed under a different party, as an independent, or not listed at all when it came time to vote, and not just in Brooklyn, where the BOE has acknowledged that 126,000 voters were removed from active voter lists, some possibly in error.

Still, it sounds as if the board has not quite abandoned its blame-the-voter arguments, first tried out the day after the primary, when BOE director Michael Ryan said, "No one was disenfranchised."

Speaking to the Indypendent last week, Ryan said, "More often than not, you’re finding invalid affidavits in primaries because people are trying to vote parties that they’re not registered." 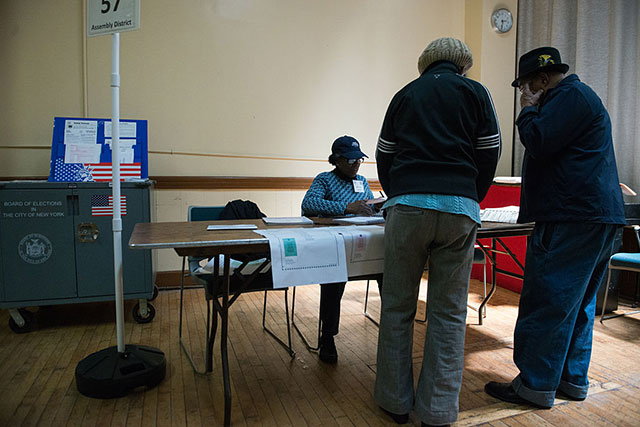 The confusing part about this is that the problem faced by numerous voters (we're waiting to hear back from the board about 25 more and less documented instances of problems) is that they don't show up as registered in the proper party though they're certain they were—certain because they voted in a recent election and changed nothing subsequently, or because they registered recently and are sure they beat the new voter deadline in March.

"If that's your mistake, my vote should be counted," said one voter at last Tuesday's BOE commissioners meeting, explaining that BOE workers acknowledged a clerical error ahead of the primary, but told her it was too late to update the rolls, so she had to vote by affidavit.

There are definitely cases where an examination of a voter's record has revealed a forgotten party change or missing signature on a form that could explain certain registration problems. But if all the board has found is that people who say their registration was improperly changed aren't properly registered, it is easy to see why rejected affidavit voters are upset.

Another line of reasoning Ryan pursued with the Indypendent is that the main source of sustained discontent over the handling of the election is voters upset with New York's closed primary set-up.

"We were warned in advance that there were folks out there that don’t like the New York primary system, and were going to advance a narrative," he said. "And they were well in the process of advancing that narrative and trying to make their pitch for why the process should be open primary like other states and not a closed primary."

Again, there is a kernel of truth to this, in that the afternoon before the primary, activists sued over the registration irregularities and encouraged those with registration problems to vote with an affidavit ballot in hopes that a judge would order a meticulous accounting, or even an open primary. Those activists even encouraged independents to vote, starting that evening before the primary. And at meetings the month before the primary, Ryan and commissioners anticipated an influx of voters unfamiliar with New York's closed primary system and voted to order extra affidavit ballots. That said, the majority of people we talked to about their registration problems are not disgruntled independents trying to make a point.

Angelica Thornhill, whose voting travails Gothamist chronicled on Primary Day, told commissioners last Tuesday, "The problem we have is, under the circumstances you're talking about...[when people] show up and they're not in the books, obviously you guys need to check and see they're registered in the city. But what happened this primary election is...[[registrations] were changed. My sister was listed as inactive and she's lived here five years. I was switched to no party and I called a month ahead of time and was told I was registered Democrat."

Thornhill obtained a court order on the day of the election to allow her to vote, but the board made a point of pulling her file and stating that she had checked "I do not wish to enroll in a party" on a DMV form, thus pulling her out of the Democratic Party.

How do we account for the 90,000 discarded ballots, then? The BOE has not responded to questions on this and other topics. But it appears that even more ballots have been set aside.

An initial post-primary count put the total number of ballots cast in the city at 1,032,796. The 30,000 remaining affidavits did not bump the official total up, though. In fact, the number of ballots counted has fallen in the certified results, to 1,023,714.

This seems to be in part because listed in the official results are 10,800 "unrecorded" votes, which Ryan explained refers to ballot choices left blank. For instance, he said, a Democratic presidential primary ballot with a bubble filled for a presidential candidate but no delegates selected where the instructions said to pick six would result in six unrecorded votes being tallied. Blank or damaged ballots would also add multiple unrecorded votes to the count in the example of the Democratic ballot.

As for the results themselves, the closer counting boosted New York City vote totals for both Bernie Sanders and Hillary Clinton, but benefited Clinton more, increasing her victory margin from 248,000 to 266,000. Donald Trump's win got some added distance also, with his lead over John Kasich going from 45,000 to 49,000. The state has not yet published certified results incorporating all of the counties' updated totals.

Now that the city's results are certified, Election Justice USA, the group that sued the BOE in the first place, is encouraging affidavit voters to contact the BOE to see if their votes were counted. The Elections Board is supposed to mail notices explaining when provisional ballots weren't counted, but because of the backlog of rejections and a 20-day time limit on challenging the outcome in court, the group's lawyers say it's best to check yourself at the Board of Elections.

"We are in a race against time and are fully engaged in getting the word out as promptly and widely as we can," said Shyla Nelson, a volunteer with Election Justice, in a statement.

Election Justice and good-government advocates who have spoken before the board emphasized that the pool of votes now being discussed is far smaller than the scale of disenfranchisement, as untold numbers of other voters were turned away at the polls without being offered an affidavit ballot, or being aware of it as an option.

"Their right to vote has been irreparably harmed," said Blaire Fellows, the attorney representing Election Justice. "New York City and state deprived hundreds of thousands of voters of their constitutional right."

At a meeting of the city BOE's commissioners this afternoon, board director Michael Ryan confirmed that the counting of the affidavit ballots is complete. The rejected affidavit ballots will be set aside for two years as required by law, and could be examined if a judge issues a court order, but otherwise the board's inspectors are done considering them, he said.

For the provisional ballots that were counted, he said that board workers reviewed all available voter data when assessing each of them, and where they found voters to have had their party changed or registration deactivated in error, they are planning to update the listings in time for the June federal primary. First, though, workers need to assess whether those erroneously removed voters have tried to update their registration since the error, to ensure that an update doesn't further foul up the database entry. The process should be completed in the next week or so, Ryan said.

The city board is also in conversation with the state Attorney General's Office, which is investigating its data handling, and the state BOE, which is considering ways to prevent the problems from repeating, Ryan said. Because of this year's elections, no non-routine data maintenance will be done until at least next February, providing time to come up with solutions.

Of 176 voters with issues singled out by attorney general investigators, Ryan said that 71 were not registered with the proper party, 35 were rightly made inactive when mailed address confirmations bounced, 5 were rightly purged when they changed addresses with the postal service, and another 65 "will be the subject of further conversation," because they were listed as active Democrats or Republicans, and it's unclear at the moment what their problem was.

The review of all recent registration updates has been akin to "peeling back the onion," he said, and has revealed problems beyond Brooklyn's, including four people in the Bronx removed from the rolls due to inaccurate death data from the Social Security Death Index.

Asked how he feels having been bombarded with voter complaints, some profanity-laden, for the last three weeks, Ryan maintained that some of the loudest concerns were coming from "what appears to be a professionally orchestrated group" who knowingly casting false affidavit ballots in protest of the closed primary system. In condemning Sanders supporters who spoke at meetings, especially those with similar talking points about discrepancies between certain exit polls and the election results, he said that people with "real" problems were being ignored as a result.

What I'm concerned about is the people, the regular folks that aren't part of this larger cause that had their real grievances stepped on and drowned in the din of politically orchestrated conversation. I would hope that those folks don't get discouraged and that they continue to make us aware, not in a cross way, but in a constructive way...When the questions start to become repetitive, and when people are reading verbatim quotes, and those quotes happen to be the same quote over and over again, then what happens is the real folks, the real people that have a grievance, their grievance isn't heard. And that's a shame.

Asked what the source of his information about the supposed protest-vote campaign was, Ryan said the state BOE informed him of the issue sometime in February or March.

State Board of Elections spokesman Thomas Connolly said that the state board warned county leaders on a conference call in March that they were getting a lot of phone calls from voters unhappy about the closed primary and the October party-change deadline, but did not mention what Ryan characterized as an impending "avalanche of protesters."

#affidavit ballots
#bernie sanders
#Board of Elections
#disenfranchisement
#donald trump
#hillary clinton
#john kasich
#new york primary
Do you know the scoop? Comment below or Send us a Tip