It would not be Election Day in New York without serious problems at the polls, and today's Trump-Clinton contest is no exception. Emails have streamed into Gothamist since the polls opened describing long lines, broken scanners, and egregious poll worker errors.

At PS 92 on Parkside Avenue in Brooklyn, one reader reported a 2 hour 45 minute line due to broken scanners—a figure down from the 4 hours it took to vote there in 2008, but still extremely long. At PS 154 on West 127th Street, another voter said that the poll site was down to one scanner from at least 8 a.m. until about 10:30, and that it took two and a half hours to vote. On Roosevelt Island, the poll site was down to one scanner at 8 a.m., and zero by 9:20, according to voters, sending the line coiling around the room. The scanners were back up by 11, according to one reader.

Here's a dispatch from Trump's polling place, on East 56th Street, which shut down so Trump could vote.

It's absolute chaos inside the polling station here. A poll worker now screaming at someone in line, "Don't put your hands on me."

And here's footage of an extremely long line to vote elsewhere on the Upper East Side:

At Charles Hill Tower on Eighth Avenue in Harlem, all scanners were down at 9:30 a.m., and voters were forced to cast affidavit ballots, another voter said.

There was no such luck at the Central Baptist Church on the Upper West Side, according to a would-be voter there. According to the tipster, the BOE inadvertently delivered one district's voter rolls to the wrong polling place and workers were only just beginning to address the issue at 7:30 a.m. The voter said she was told to "come back in a few hours." The problem had been fixed when we visited at 9:40 a.m., but the poll site coordinator refused to say any more.

Another voter wrote that the Jewish Guild for the Blind on the Upper West Side closed down completely around noon after struggling with scanner problems. "Lots of voters gave up and left," the tipster wrote.

A 2014 report by the Presidential Commission on Election Administration, formed following problems with the 2012 presidential election, concluded that "no voter should have to wait more than half an hour," and that where that happens, "corrective measures should be deployed." And as research cited by the New York Times today found:

Citing the presidential commission's report, Manhattan Councilman Ben Kallos, chairman of the Council Committee on Governmental Operations, wrote, "At poll sites across the city, New Yorkers are reporting long lines. The consolidation of poll sites crammed too many election districts into mega-poll sites and left New Yorkers waiting on mega-lines. For safety, the fire code limits how many people can occupy a space and the number of voters at certain poll sites is dangerously close to those limits. We need additional, wheelchair-accessible poll sites to reduce lines and ensure a safe voting experience."

Perhaps even more troubling than technical and logistical malfunctions is poll worker misdirection, based on false understandings of law and procedure. At PS 142 in Carroll Gardens, reader Nicole Yoblick wrote:

The people working at my booth giving out forms were instructing us that we have to vote ALL democratic or ALL republican, that we could not pick and choose or the machines would reject the form when scanned. They said it had happened multiple times already...So we would not be allowed to vote for a democratic president and a republican senator. This is wrong!"

This is indeed wrong—in a general election, any registered voter of any party can vote for any candidates he or she chooses. Susan Lerner, director of the good-government group Common Cause, which is fielding nonpartisan poll monitors throughout the city today, said this isn't the first time she's heard of such bogus instructions being given at the polls.

"This is a poll worker training problem," Lerner said, explaining that she believes some poll workers are being misinformed or misremembering the difference between New York's closed primary system, where one must be registered to a party to vote in its primary, and the general election. "I suspect that it has to do with the fact that poll workers are only trained once a year for both the primary and the general election. We've already had three primaries this year."

In a scathing 2013 report, the Department of Investigation found that four of nine investigators it sent to apply as poll workers observed people cheating on the test for prospective poll workers. Investigators also found more than a dozen instances of privacy violations by workers during the 2013 general election, and more than 15 instances where workers instructed voters to "vote down the line," as apparently happened in Carroll Gardens this year.

Common Cause heard complaints about this sort of misinformation at five or six poll sites in 2014, according to Lerner. "We are alarmed to learn that it is happening again," she said.

A voter at IS 52 in Inwood reported a poll worker telling several people the same thing.

"When I challenged her and said that is not clear or correct because one could vote Democrat for president, Green Party for senate and so forth she told me I was wrong and did so in such a loud and argumentative way that everyone nearby stopped to listen," Gregory Sholette wrote in an email. "When I asked her where she got her information from she refused to answer and said the conversation was over."

Following publication of this article, commenters cited similar incidents in East Harlem, PS 128 in Bensonhurst, and PS 6 in Flatbush, and voters emailed us accounts of the same at a senior center on Albany Avenue in Crown Heights, and City As School in the West Village. 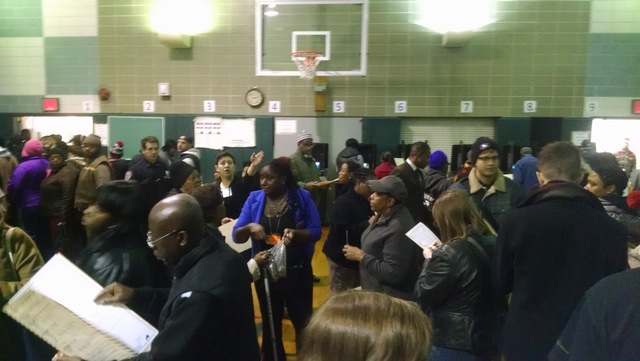 PS 6 poll site coordinator Melida Mason, center in purple, passes out pens for voters to fill out their ballots while in line. (Nathan Tempey/Gothamist)

At PS 6, in addition to a 1 hour 40 minute line this morning, workers were ushering voters into the gymnasium faster than they were voting, leading to the room becoming so packed that it was hard to move. In an effort to speed things along, at around 9 a.m. poll site coordinator Melida Mason encouraged voters waiting for booths to fill out their ballots in line.

"If you would rather not wait for a booth, you can fill it out in the line and go straight to the scanner. My sincere apologies, but this is what we're dealing with," she said, passing out pens to a few dozen voters who obliged. "If you want to do it in line, that's fine by me. If you want to get a booth, you'll have to stay in the line."

Mason's instructions seem to encourage people to violate Election Law Section 17-130, which makes it a misdemeanor to show your ballot "after it is prepared for voting," the same law that outlaws ballot selfies.

Another voter reported poll workers handing out pens and encouraging line-waiters to vote outside the booths at PS 92 as well.

Similarly, at MS 51 in Park Slope, a voter reported workers trying to speed the line by grabbing ballots out of people's folders unprompted and inserting them into the scanners.

"That's improper," Lerner said of the MS 51 maneuver. She declined to opine on the legality of these moves overall, but said, "We are very protective of the secrecy of the ballot."

Citywide, she said, 'There's a solid number of polling places where we’re getting reports of long lines: the Upper East Side, one or two places in the Village, Crown Heights, reports in the Flatbush area, where people are waiting two hours or more to vote... Carroll Gardens."

In Harlem 5th district. All scanners are broken. Have to use emergency ballot box. Been waiting an hour to vote. Why no early voting NYC?

The problems are not unique to this election, though. "Unfortunately this is not out of the ordinary for New York City," Lerner said. Unlike 37 states nationwide, "We don’t have early voting so everything has to happen on Election Day." The lack of early voting and the closed primary system are two of many instances where New York's voter access lags behind other states. A bill is currently before the state Senate to implement early voting, but Lerner said past measures have failed. "It always dies in the Senate," she said, with lawmakers citing the cost, and claiming early voting will cut down on civic engagement.

Also, Lerner said, "We have more voters than any place else, so it’s not surprising that there would be long lines. The Board of Elections doesn’t have the resources to adequately address the situation."

By this, Lerner said she means not that the BOE is underfunded, but that it is fundamentally ill-equipped to run elections because of the way it's set up: commissioners who control hiring are appointed by county political parties, and there are no measures in place to ensure that the people running the show are actually qualified to administer elections.

"The big problem comes from the fact that it is a patronage-driven administration. It’s political, not civic," Lerner said. "People are not chosen for their skills and experience as election administrators or in managing things, they are hired based on their party affiliation and who they know. The two directors we have now definitely want to do a good, professional job, but neither had experience as election administrators before they were hired."

We've reached out to the Board of Elections for more information on the problems we're hearing reports about and will update if we hear back.

Polls are open until 9 p.m. If you are on line at 9 p.m., you should be allowed to vote. To reach the BOE directly with questions, the main office number is (866) 868-3692. Contact information for each of the borough offices is here. To find your polling place, click here (or if that website is down again, try this).

To report problems at the polls, check out our guide here.