Election Day Dispatch From The Florida Suburbs, Where A Clinton Victory Is Uncertain

New Yorkers are flocking to the polls en masse today, at some locations waiting on line for hours while poll workers struggle with broken scanners, misplaced ballots, and high turnout. In other parts of the country, black and Latino voters have faced intimidation at the polls and laws intended to suppress their votes. Voters in the suburbs outside Tampa, Florida—one of the most highly contested cities in arguably the most highly-contested state in the election—seemed to lack the urgency so palpable in New York City. Voters I spoke with seemed calm, even jovial, despite the election being too close to call in Florida. But if you were to conduct a poll using lawn signs and bumper stickers, Donald Trump would win by a landslide.

My parents voted this morning, for the first time since immigrating to this country 17 years ago, at a Baptist church in Pasco County, a 30-minute drive from Tampa proper. The church's lawn was littered with signs supporting candidates for property appraiser, senator, and of course, president—but there were no Clinton/Kaine placards in sight.

Unlike other parts of the state, Pasco is a relatively homogenous county—the population of roughly 500,000 is 89 percent white, and just 9 percent of residents are immigrants. Just a fifth of Pasco residents have graduated college, and the average annual income hovers around $24,000. Simply put, this is where you find Trump's base.

"I was undecided all the way up until when I saw the names on the ballot, and I made a decision just now," one woman said to another as they left the church and walked to their respective cars. "Socially, I'm liberal, but financially it just doesn't make sense." She declined to tell me who she voted for. 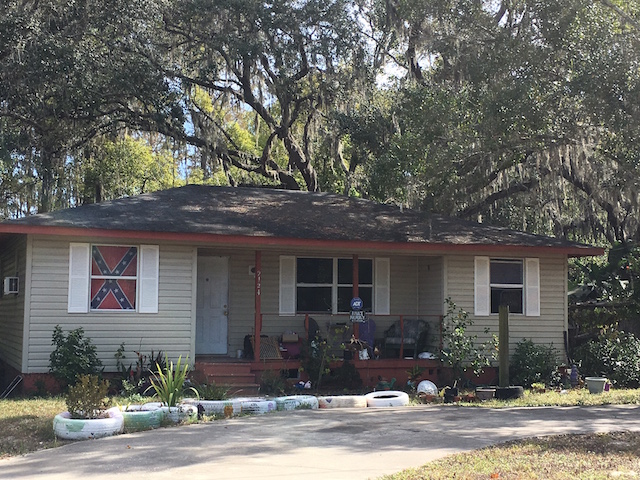 In Moon Lake, an unincorporated community on the far west side of Pasco, people were eager to discuss their votes. On the 20-mile drive there, I saw more than 20 Trump lawn signs and a bumper sticker referring to "Killary" Clinton as the whore of Babylon.

"I just want to see a non-politician voted to the highest office," James Hersh, 48, said after exiting the First United Methodist Church. Hersh voted for Trump twice: first in the primary, which Trump won in a landslide victory.

Larry Johnson, 60, said he is looking forward to watching Trump win tonight. "I'm glad all the commercials will end!" he said of the election. But he worried about what would happen in the event of a Clinton victory. "I don't know if our country will come together after this," he said. "It depends on who wins. If Hillary wins, we're in for turmoil. I'm going to start stocking up on bullets. She wants to let in 65,000 Syrians! That'll be nothing but trouble."

Janice Menaghan, a 70-year-old Moon Lake resident originally from South Carolina, said she viewed Trump as a way to "create a new history" for the United States.

"Obama has divided this country tremendously. He used to attend a church led by a pastor who hates this country!" she said. "Trump cares about the inner cities—the Democrats don't actually care, they just use them for votes."

National healing, she said, will only happen if the winner treats his or her opponent with respect—but Menaghan isn't worried about Trump refusing to concede in the event of what she thinks is an unlikely loss.

"I think he was just making an off-the-cuff comment," Menaghan said, regarding Trump's claims that he may not accept the results of the election. "He's a blue-collar billionaire; he sometimes says things without thinking. But I think he has a heart that is moldable, if he wins, he'll let God into his life—Hillary won't. We need change in this country. We've got to come together." 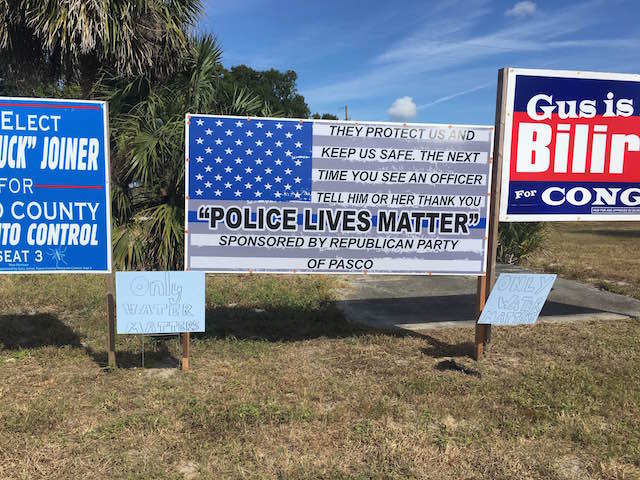 Just a few miles away in Hillsborough County, a Trump victory doesn't seem as guaranteed—but it's still within the realm of possibility. Like Pasco, Hillsborough has a white majority—approximately three-quarters of the population—but it also has sizable black and Latino populations.

Both Trump and Clinton have been campaigning hard in Tampa Bay, and with good reason—the county is divided nearly equally between Republicans, Democrats, and independents, and whoever wins Hillsborough usually wins the national election. In Hillsborough, voters of color may be the deciding factor.

"They don't give Hispanics a chance to get out of their crappy schools and poor neighborhoods—they want to keep you segregated in hell holes. Minorities are not in step with the Democrats," Phillips said.

Of course, not all Hillsborough county voters had the same opinions about the election. Mi Familia Vota, a nonpartisan group that focuses on getting out the Latino vote, has not technically endorsed a candidate—but spokeswoman Michelle Prieto told me that many Hillsborough-area Latinos have expressed a desire not only to vote, but to vote against Trump.

Amos Allen, a 63-year-old veteran who voted for Clinton today in Hillsborough County, said Trump's words and actions were regressive.

"I didn't come back from a war zone to see this country go backwards," said Amos, who is black. "I've felt discrimination and prejudice throughout my life, but we're not stuck. We don't need to go back to the '60s. We can come back together from this."

#election 2016
#florida
#hillsborough county
#pasco county
#tampa bay
#original
Do you know the scoop? Comment below or Send us a Tip