As New York City's Board of Elections braced for what they thought might be presidential-year turnout for Tuesday's midterm election, they greenlit the purchase of extra ballots and more poll workers to staff sites across the city.

But despite the fact that for the first time ever they would have a two-page ballot—meaning the scanning machines would be doing twice the work for each voter outside of Staten Island—the BOE only upped the number of scanners by 459, or 12 percent, according to a review of the Board’s annual report and a rundown of equipment deployed on Tuesday.

The two-page ballot and the ensuing scanner shortage were the leading factors in a cascading series of Election Day problems, which were exacerbated by the perforated ballots; New York’s archaic state laws; and the rainy, humid weather, which caused some ballots to swell in a way that caused widespread scanner jamming problems, according to the BOE. Taken altogether, the problems resulted in an epic logjam at the polling places across the city, the likes of which many New Yorkers said they’d never seen before.

“What went wrong yesterday was for the first time in the history of the city of New York, we had not only a high turnout but a two-page four-sided ballot in four out of the five boroughs," said Michael Ryan, the executive director of the City’s board. "So we had approximately 4 million pieces of paper passed with the scanning machines on Election Day. What we experienced was we have, again, the machines that are nearing the end of their useful life cycle day and the volume is an issue these machines.”

When asked why the board hadn’t prepared for all the additional ballot sheets by adequately increasing the number of scanners at poll sites across the city, Ryan deflected, blaming the federal and state laws and a lack of space at poll site.

“If we were going to deploy additional scanners to poll sites we would have to really survey each polling site to ensure accessibility and all poll sites are not created equally,” he said. “There are a lot of factors that we have to take into consideration. And simply deploying an additional scanner, what sounds like it's simple on paper is not so simple...And with all of the other considerations that have to be given to preparing for an election, you know, five weeks out is not the time to be able to do that.” 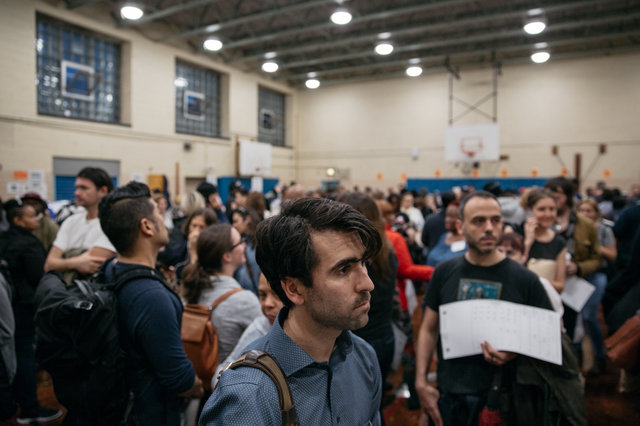 Crowding and confusing at P.S. 11 in Brooklyn on Election Day. (Scott Heins / Gothamist)

The Board of Elections only got their hands on a final version of the ballot a few weeks before the election, Ryan said. The mayor’s charter revision commission added three questions to the ballot and, according to Ryan, because the state’s election law dictates ballots' layout, ballot questions and candidates can’t be on the same page.

The questions were finalized in September, though the public hearing process began in March. Valerie Vazquez, a spokeswoman for the City’s Board of Elections, cited litigation for some candidates on the ballot that had been settled last minute and contributed to the hold up, but declined to comment further.

There were hints in the weeks leading up to the election that the two-page ballot was going to cause trouble on November 6th. At an October meeting of the City’s Board of Elections, commissioners voiced concerns about 17-inch long sheets and additional pages getting jammed in the scanners.

Ryan described a system where poll workers were supposed to alternate use of scanners on site, for fear that the additional pages would fill the boxes quickly and lead to jam-ups.

“If we do the rotation properly, and all the scanners are utilized, [and] we have 50 percent turnout which would be a record for a gubernatorial, we shouldn't have a problem,” he said.

The commissioners settled on an increased number of ballots, with no mention of beefing up the number at scanners at poll sites.

Election Day came and the troubles began almost as soon as polls opened.

Throughout the rainy day, long lines snaked around sweaty gymnasiums and community centers, as voters waited to feed their ballots into scanners. Some scanners had to be taken out of service and there were reports of poll sites down to one or two or even zero functional scanners. Voters described filling out their ballots on the gym floor. Others had to cram theirs into emergency ballot boxes to be counted later, and when those overflowed, images surfaced on social media of ballots stuffed into plastic bags left unattended in the crowded poll place.

@BOENYC bag of ballots sitting on a chair unattended for over 15 minutes pic.twitter.com/GEdgtzWELd

During the course of the day, the Board of Elections had to replace 56 of its 4,054 scanners citywide, up from 31 in the 2016 presidential election, according to Ryan. It’s not clear how many scanners overall were broken and then fixed by inspectors on site, or how many were simply left out of service.

And while 1.9 million people voted, an 88 percent increase from the 2014 midterm elections, nearly a million more people cast ballots in the 2016 presidential elections, with seemingly less issues overall.

“It’s as if there was a purposeful plan to make voting as unappealing as possible,” he said. “The Board of Elections can’t do its job; it is making it harder for people to vote, not easier. It is part of the problem. It must change.”

People are leaving because it’s a 2 hour wait at PS 316 in Crown Heights, Brooklyn.

Adding to the shortage of scanners, the rain and average humidity levels of 68 percent contributed to the chaos, according to election experts. The DS200 scanners used by the City’s Board of Elections function best below 50 percent humidity, according to product’s manual. As humidity levels rise, several things can happen that can decrease the scanners’ reliability, according to Joseph Lorenzo-Hall, Chief Technologist at the Center for Democracy and Technology.

The ballot paper absorbs moisture and gets thicker, which can cause it to jam more easily. Add to that the fact that the ballot pages were 17-inches long, instead of the size of a regular sheet of paper, which creates an additional hurdle, he said.

“All those things lead to a mess,” Lorenzo-Hall said. “I got a lot respect for Mike Ryan at the New York City Board of Elections, but this is a huge mistake and we really need to make sure this never happens again.”

When asked about scanners being able to function when it’s rainy or humid, the city’s board pointed to the state’s board, which has to approve the scanners used. Cheryl Couser, a spokeswoman for the state’s board said they had “no way of knowing whether or not the humidity played a factor in any of the difficulties experienced with the machines in NYC and if so, to what extent.”

Beyond the weather, there were additional things outside the board’s control that added to the misery, beyond just the weather, he said, like a New York State law requiring the ballots be printed in a conjoined pad and only separated when a voter is ready to vote. This ends up creating a jagged edge that can actually snag on the scanner when it’s fed in, he explained.

And of course, New York is one of the eight states that hasn’t passed election reforms to allow early voting, or no excuse absentee ballot voting.

“You guys need to make sure people don’t have to come on a single day to vote or your gonna have problems like this for eternity,” Lorenzo-Hall said.

#ballots
#Board of Elections
#boe
#election
#election day
#midterms 2018
#voting
#original
Do you know the scoop? Comment below or Send us a Tip