An eight-year-old boy who was hit by a driver while crossing a Queens boulevard on Monday evening is in critical condition.

The boy, who the News identifies as Sincere Atkins, was crossing the street on Sutphin Boulevard near Rockaway Boulevard and Baisley Pond Park around 5:00 p.m. yesterday, when the driver of a red Toyota Corolla struck him. The 21-year-old male driver stayed on the scene while the boy was rushed to Long Island Jewish Medical Center in critical condition.

Witness Ashleigh Dorsey tells the NY Post, "What happened is that the two kids were playing around with each other and tried running across the street. One got across the street, and the other just didn’t." 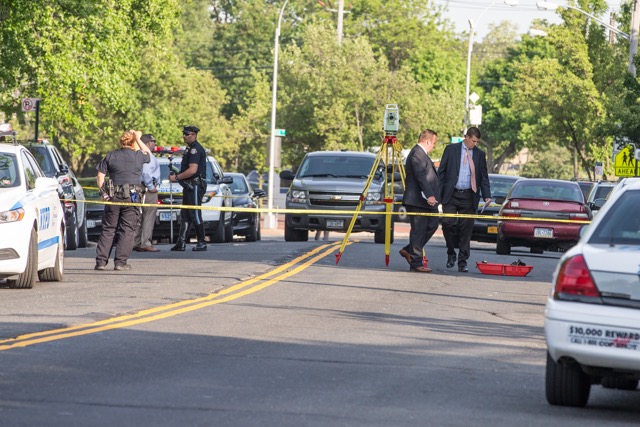 Another witness rushed to Atkins's aid, telling the Post, "I grabbed his head and tried to console him. Every minute he was taking huge gasps of air. After about three minutes he opened his eyes but they were rolling into the back of his head.”

A family member told the News that Atkins had run from the park over to his grandmother's house, and was struck on the way back. She added, “I thought it was glass. That’s how hard he hit his head on the ground."

Atkins was not the only child to be struck by a driver in NYC this Memorial Day Weekend. On Sunday night, a seven-year-old girl was struck by a hit-and-run driver in the Bronx, while crossing the street to get ice cream.

#pedestrian hit
#queens
#vision zero
Do you know the scoop? Comment below or Send us a Tip
A new Gothamist is coming! We’ve moved comments over to our beta site. Click here to join the conversation and get a preview of our new website.