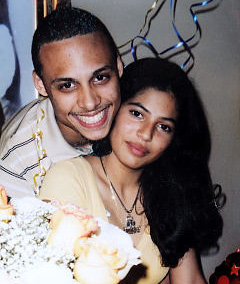 19-year-old David Diaz (pictured here with his former girlfriend) recently moved from Harlem to the Bronx, but on the last night of his life he was palling around with friends in his old neighborhood, tossing eggs off a roof on West 135th Street. When one of their targets headed up on the roof to confront the teens—wielding a knife according to one report—the youths scattered. The Daily News says that Diaz, his right arm in a sling from a football injury, tried to escape by jumping over a brick wall he thought separated one building from another. Instead, he fell six stories to the courtyard below.

"All you heard was 'Boom! Boom!" says David Ruiz, president of the building's tenant association. He tells the News that Diaz "hit an air conditioner and then the [ground] floor. But he was alive. This kid was so strong he kept trying to sit up." Police say Diaz sustained two broken legs and was rushed to St. Luke's Hospital in critical condition, where he died Monday morning "of multiple trauma." Ruiz tells the Post that down in the courtyard "he was telling us with his hands that he was running and fell off." With a tabloid flourish, the Post also notes that Diaz's fingerprints were still visible yesterday on the window with the air-conditioning unit, "where he had clawed at the glass in a desperate bid to brace himself."

His distraught mother Rosa Diaz tells the News, "He was my baby. He was a good boy. They were just fooling around. This shouldn't have happened ... This is terrible. I want to find peace." And Pablo Rosario, coach of the Harlem Jaguars community football team that Diaz played on, spent yesterday passing around a football for his team to sign: "I am just going to take it to his mother. Hopefully, she'll decide to let him take it with him."