A whole nest full of swan eggs went missing from Prospect Park over the weekend, vanishing as quickly and as completely as if it had evaporated into thin air. Swan advocates suspect foul play—yes, it seems we have an egg thief in our midst, and a mystery on our hands.

Mary Beth Artz, one of the co-founders of W.I.L.D. for Prospect Park, told Gothamist that she was paying a routine clean-up visit to the Prospect Park lake on Saturday when she noticed that two new swan parents had vacated their nest. That struck her as odd—swans go to great and aggressive lengths to defend their young, and would not leave them unattended—but she figured they were simply hiding outside her sightline. When the crew finished the job around 12:30, however, she saw the swan couple swimming toward the middle of the lake, away from their clutch of eggs.

"It was pretty far away from the nest location, so I knew something was up," Artz said. "Normally [adult swans] would never leave the nest like that." They might take turns guarding their spawn, but no self-respecting swan parent would leave its eggs alone and vulnerable to attack. Or, if an avian emergency came up and they absolutely had to abandon their incubating offspring, they'd first hide their horde to minimize the possibility of a snatching.

When Artz went over to check out the scene, she found that the nest—which should've been an approximately three-foot divot, lined with down and other comforting debris—had been "completely cleared and leveled out," the evidence of its existence totally disappeared: 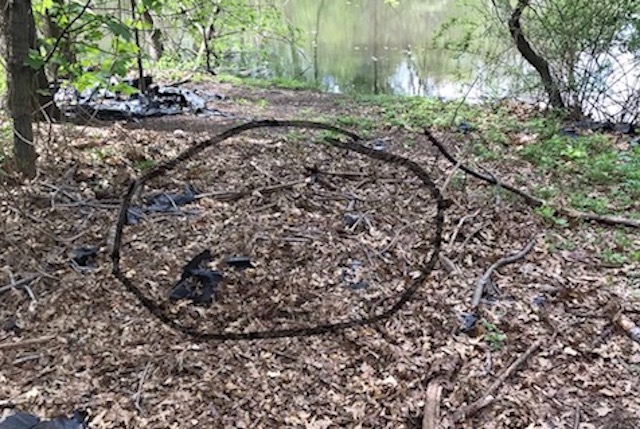 Vanished without a trace! (Courtesy of Mary Beth Artz)

Still, Artz knew from park employees that the nest had been there Friday evening: She concludes a human egg-napper must have crept in overnight. Why, you ask? Because at roughly three weeks old, the eggs were only about halfway through their incubation period, and too young to hatch. Also, the park's most probable animal culprit probably couldn't have pulled off a heist of this magnitude. 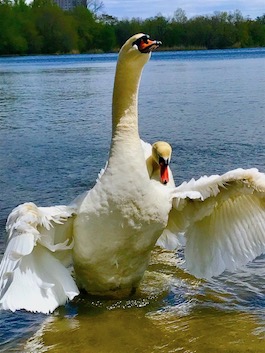 "A raccoon, first of all, would not be able to fend off the male swan," she said. Furthermore, "a raccoon couldn't pick up seven eggs and walk away with [them] and then make it look like nothing was there."

Trash pandas' creepy little man hands aren't large enough to accommodate multiple swan eggs, the size of which I would estimate at about four times that of your average chicken egg, nor do raccoons tend to clean up after their snack rampages. Whoever absconded with the swan babies left no trace: no shells, no egg matter, no tracks, no nothing. This is manmade chaos, friends. (Or so Artz heavily suspects.)

Now, only two questions remain: Whodunnit, and why? The New York Department of Environmental Conservation has identified a swan problem within the state, and because these water birds are an invasive species, Artz said the DEC may have an interest in clearing their nests. Artz says she has been told that's not what happened here—Gothamist has contacted the DEC for comment. In a statement, a spokesperson for the NYC Parks Department told us:

We can confirm that an active swan nest with seven eggs disappeared over the weekend from the area of the Prospect Park Lullwater. The nest was not removed by a Parks or Prospect Park Alliance employee, and we are currently investigating. As a reminder, it is against our rules to interfere with or harm wildlife in parks, and we encourage New Yorkers who witness such activity to report to 311.

As to the bandit's motives, the culprit could've taken the eggs for any number of reasons, including a desire to breed them, to eat them, or to engineer a little mayhem just for the hell of it.

"People hang out in the park overnight," Artz noted; it's possible someone spotted the nest and decided to grab up its contents for kicks. "But they'd have to go up against that male swan, and the female," she pointed out, and battling two hyper-protective parents would be no easy feat. "Somebody had to know what they were doing."

According to CBS New York, tampering with park wildlife qualifies as a misdemeanor that carries a $1,000 fine or a 20-day jail sentence. We will update as the screw continues to turn and to reveal fresh details.

#mysteries
#parks department
#prospect park
#swan eggs
#swans
#theft
#original
Do you know the scoop? Comment below or Send us a Tip