Safe streets advocates and classmates of children who were killed by dangerous drivers gathered in front of City Hall this morning to push Albany to pass a bill that would allow the city to install more speed cameras near public schools.

Currently there are 140 school safety cameras, and they are only in operation during school hours and one hour before and after school. According to the DOT, daily speeding violations have decreased by 60% in areas where the cameras are installed. In 2015 alone the city collected $31 million from the cameras.

The Every School Speed Safety Camera Act, proposed by Assembly Member Deborah Glick, would allow the city to deploy more school safety cameras and be able to use them 24 hours a day.

Yet the bill's proponents haven't found a sponsor for it in the Republican-controlled State Senate, and the legislative session ends on June 16th.

"The notion is that this is nothing more than a revenue raiser. That this is really an attempt to raise revenue from unsuspecting car drivers," said Public Advocate Letitia James. "And the reality is that there's nothing further from the truth. If individuals are concerned about getting tickets, all they have to do is slow down."

City Council Majority Leader Jimmy Van Bramer called the lack of support for speed cameras in the state capital "a clear indication that Albany has too much power when it comes to laws of the city of New York."

"The plastic bag overturn effort and then this are two instances where in one case, we actually have the power to legislate in our own city, but they then go and try to take that power away from us," Van Bramer said, referring to the State Assembly delaying the enactment of a bill that would require New Yorkers to pay a five-cent fee when using plastic bags at grocery stores.

"This is an instance where we actually need them in order to effect legislation that would save people's lives and they haven't yet done so." 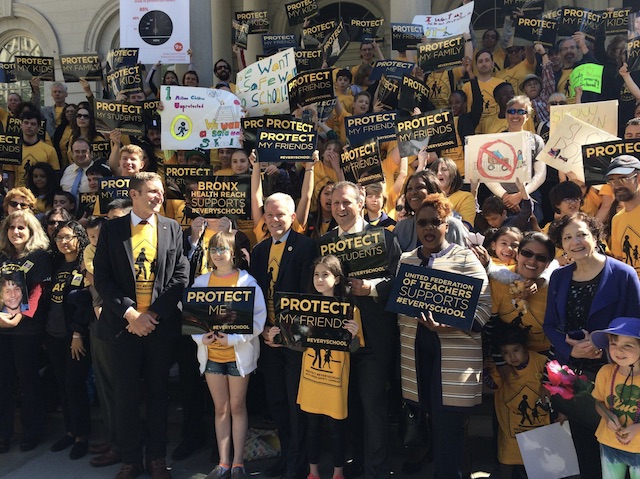 The students present at today's rally included classmates of third-grader Cooper Stock who was killed by a cabbie making an illegal turn in 2014, and students from MS51, where three students were killed in separate traffic incidents between October 2013 and November 2014.

Assemblymember Glick told Gothamist that she is trying to find a middle ground on the bill, and is willing to increase the amount of cameras but not lift the cap entirely and also have cameras in operation from 7 a.m. to 7 p.m. instead of 24 hours a day.

"We weren't getting significant movement on the rather major expansion, so as the waning days of the session are approaching, we've taken a second look at it, and are looking at it with the aid of Transportation Alternatives and DOT, a middle ground and hopefully we can get that done in the coming week," she said.