Edwards Will Drop Out, Leaving a Clinton-Obama Duel 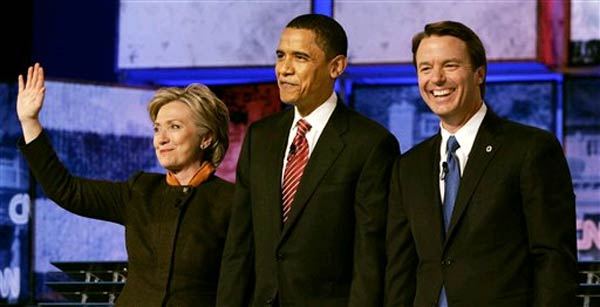 Photograph of Clinton, Obama and Edwards at a debate last week by Charles Rex Arbogast/AP

John Edwards will drop out of the presidential primary race. The Caucus finds symmetry in the announcement, since Edwards will give "a speech this afternoon at the same place where he began this campaign — in New Orleans." Which now means the path is cleared for a full-tilt boogie Hillary Clinton vs. Barack Obama fight for delegates and the nomination. We also expect some wooing from Clinton and Obama for Edwards' delegates.

Clinton won the Florida's Democratic primary. Even though the primary doesn't really count since no delegates were awarded (in protest to Florida moving the primary up; candidates had agreed not to campaign there), Clinton held what looked like an elaborate celebration and gave a speech, which many cable news outlets carried while waiting for Florida's Republican primary returns. Some comments from, um, commentators via Politico's Ben Smith:

It "has the look of an event," Chris Matthews sniffed on MSNBC of the Florida rally.

"It's our job to say she's doing that because she does want that picture," said Campbell Brown, as CNN showed the picture of the rally.

"It is a little weird to have a victory celebration going on in a state where you never campaigned," said Brit Hume on Fox.

Ha! But that's not as funny or interesting as some of the comments Harlem residents gave the NY Times about the Bill Clinton-Obama scuffle. Many defended the former president's action, recognizing he's fighting for his wife and that attacks are part of poltiics. One even suggested Obama seemed to be "nice white middle-class guy" so far.

With Edwards bowing out, does that change who you'll vote for in the primary?