Ed Koch On Mosque, Pedestrian Plazas, And The Muppets 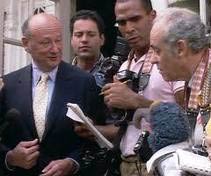 Move over, Old Spice guy, there's a new player in the personalized YouTube response to Twitter questions game. And it's former mayor Ed Koch! The 85-year-old, whose current effort, New York Uprising, is to remind voters to demand reform in the Empire State, answered questions like: