Ed Koch, Homosexuality And The Birth Of The AIDS Crisis

When somebody like former New York City mayor Ed Koch passes away, a lot of old skeletons start to tumble out of closets. And for Koch, who served three tumultuous (and oft amusing) terms as mayor, there are more than a few skeletons knocking on the door. One of the biggest has to do with his ambiguous sexuality—an issue that ran far deeper than those famous "Vote for Cuomo Not the Homo" posters.

A lifelong bachelor, Koch refused to talk about his sexuality to the end (mostly citing privacy as his reason). When New York magazine asked him to write a personal ad for himself in the 90s, he wrote: "White Male, 70-something former C.E.O. and practicing attorney.... Have belatedly concluded that everyone, straight or gay, needs a partner in life. How'm I doing?" 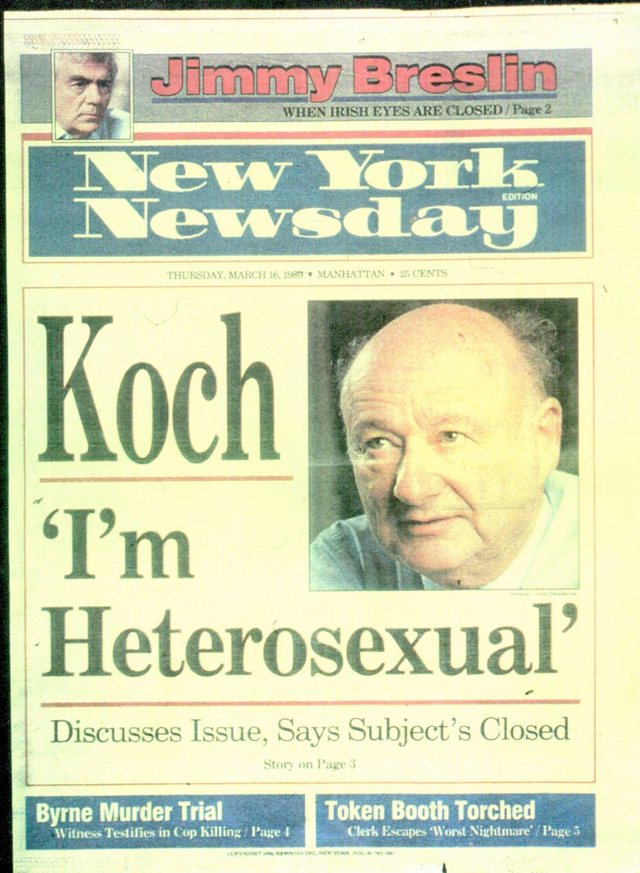 Koch's sexual orientation seemed pretty clear to those who met him personally, such as columnist Andrew Sullivan: "As I recall, there were no women at all, I was the only goy, almost no one else got a word in edgewise and the evening ended with Koch actually demanding we sit and watch his speeches on the TV. In other words, not quite as gay as the Vatican, but sheesh." Still, those nagging questions about Koch's sexuality probably wouldn't have lingered so long had he not been leader of one of the biggest gay cities in the world during the start of a worldwide health crisis: AIDS. And the gay community did not let him forget it.

"There was a belief among gay activists, propagated most irascibly by the playwright and Act Up co-founder Larry Kramer, that Mr. Koch was gay and that it was because of his concealed orientation that he was slow to act on a growing public health crisis ravaging gay men," the Times recently noted. And that belief did not go away.

Having said that, it did fade some—time has been much kinder to Koch than it might have been. Though some have not let the issue go ("We must never forget that this man was an active participant in helping us to die, in murdering us," Kramer wrote last year), others have softened, thanks to Koch's steady insistence that he did more than people thought. In a 1999 book, he said that New York had done more for its AIDS victims than San Francisco, “But that never got through to the gay community. They were brainwashed that they were getting short-changed in New York City and in San Francisco they were getting everything. And it wasn’t true, but you could never convince them.”

"I don’t want to let Koch off the hook, because his record was lousy," AIDS activist Bill Dobbs told the Times' Gina Bellafante last month, "but in the early years, some of the city AIDS groups reckoned with AIDS as a medical and health issue. They would not openly engage the politicians. They wouldn’t lay a glove on the city administration or the president."

"Did Koch do enough for AIDS?" former state senator Tom Duane, who is H.I.V.-positive, asked the Times. "No. Did anyone do enough? No. Are we doing enough now? No."

And others have been even more forgiving. In his 2006 movie Shortbus John Cameron Mitchell wrote a still-surprisingly emotional apologia for a Koch-like figure:

#aids
#ed koch
#gays
#homosexuality
Do you know the scoop? Comment below or Send us a Tip