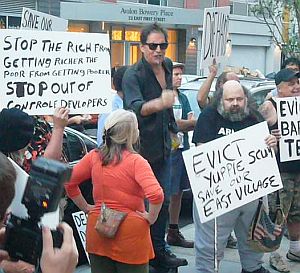 Vanishing New York has a thorough account of the proceedings, which started outside the newish Bowery Wine Company, a favorite of the dreaded “Yuppie Scum” and Young Republicans, who previously held a gathering there specifically in response to Penley’s dismay at the “right-wing takeover” of the East Village. After raucously scolding the confused patrons, the group moved over to the John Varvatos store on Bowery (formerly CBGB) and finally ended up outside Christodora House, across the street from Tompkins Square Park.

In 1988, rioters threw bricks at Christodora House, which was a community center for poor immigrants turned into a luxury condo. Twenty years later, cries of “Die Yuppie Scum” were still deployed, but no bricks, and Vanishing New York elegantly describes the scene:

[Residents of Christodora] snapped pictures of the protesters and giggled. They chatted about everyday things, and petted each other's tiny dogs. They tossed their wheat-colored hair and laughed, showing their flawless white teeth. Up on their marble steps, they did what the landed gentry have been doing for centuries – they ignored the angry mob as it railed against them.

The Times has more

on the protest, as do Neither More Nor Less, EV Grieve, and Curbed.