The FDNY has determined that the fatal fire that killed a 33-year-old woman in her East Village basement apartment was "accidental" and in the "area of outlet/power strip with many appliances." 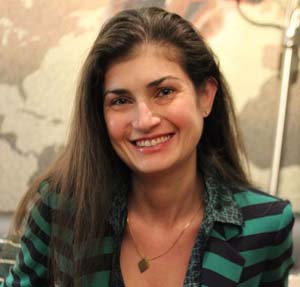 The victim was Evelyn Dahab, who owned Lucey's Lounge in Gowanus.

Two months ago, Dahab announced on Facebook that she was moving out of her apartment on December 31:

After a painful legal dispute, Big Apple Management has refused to refund my $18,000 deposit. Even the property manager looked like she was close to tears as the landlord's lawyer bullied her (let alone bullying me and my attorney) when she protested moneys owed in my favor. My lawyer made the comment that my landlord's name, translated from the Hebrew, means "pursuant of peace at all costs" -- but as my lawyer said, in Big Apple's case, the landlord should be renamed "pursuant of money and theft at all costs"... So be it... Amen, right?

Bottomline, the settlement is that I'll pay one more rent installment (why? they already have 3 months security and the last 3 months prepaid, right? -- but the voice of logic falls on the deaf ears of criminals)... And I'll move out before the new year...

She added that she was throwing a last party in the space, "This year's Grotto Christmas Eve is going to go down in the annals of NYC history.... It will be made of the memories that spin into fantastical Urban Tales of decades to come... Mark your calendars for Dec 24... SAVE THE DATE.... We're going to tear out the big screens, tear up the astroturf -- and hey, who wants a hottub?"

Dahab's mother told DNAinfo today, "She was beautiful. She was a bright girl. She'd written a book. She went to Barnard."

Another tenant of the building told us, "There were NO working smoke detectors in 31 East 1st Street’s main stairwell, or any public spaces in the building. My unit’s was not functioning, and the police conducting the investigation said multiple tenants mentioned the same thing... only through tenants banging on each others doors were we able to mobilize, contact the fire department and escape."

Big Apple Management has not responded to our request for comment.

#east village
#Evelyn Dahab
#fatal fire
#overloaded outlet
Do you know the scoop? Comment below or Send us a Tip
A new Gothamist is coming! We’ve moved comments over to our beta site. Click here to join the conversation and get a preview of our new website.