Police arrested a man on Friday night for smashing the windows of an Alphabet City apartment building that had, until Saturday, displayed two dramatically lit Confederate flags from a six-story window.

Darren Keen, an East Village DJ, was arrested and charged with criminal mischief for causing intentional damage to the windows of the controversial Avenue D apartment building just before 9 p.m. on Friday, according to police. While the NYPD says he threw an object through the windows, Keen told DNAinfo that he climbed onto the building's fire escape and punched through one of the windows that did not contain the flag.

Keen, who moved to the East Village from Nebraska three years ago, said that the flag first caught his attention last month, and that he grew increasingly frustrated alongside other residents in the wake of the violent, deadly white supremacist rally in Charlottesville.

"It's one thing for me, a white Nebraskan, to be annoyed by redneck culture... to actually see the anger and frustration it was causing disadvantaged people in the neighborhood, it escalated my feelings a lot," he said.

After taking out the window, Keen retreated to his nearby apartment on Avenue D, where he made several Instagram posts discussing the incident and displaying his bloody hand. "Yo I punched this nazi dudes Windows out in front of racist nypd I can't take it any more," wrote Keen. "Now they knocking on door when they come to mine I'm gonna blow a massive weed rip in their face."

Keen told the Post that he did not actually blow a massive weed rip at the cops, who he believes followed him to his apartment by a “trail of blood.”

According to neighbors, the Confederate flags had been hanging in the windows of the six-story apartment building since the election of Donald Trump. Before that, the apartment had displayed Iron Cross flags for years, longtime Alphabet City resident Paul Bakija told Gothamist. Following a week of neighborhood outcry, a tarp appeared on the roof of the apartment building to cover the flags. When that tarp came down on Saturday, the flags were gone. 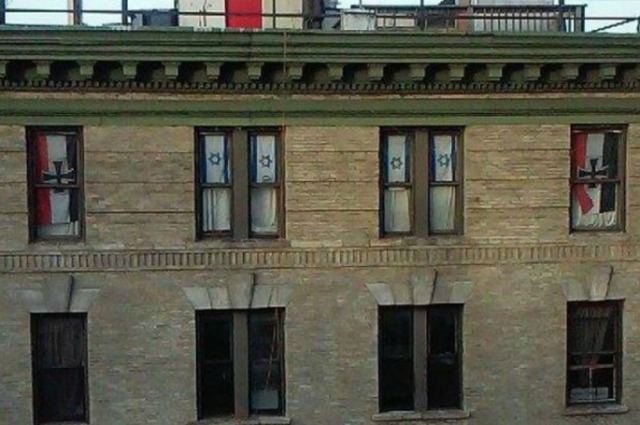 "Because of me breaking out the window the police had probable cause to enter apartment and they took down the flags so now they're gone," Keen claimed in an Instagram post. The NYPD has denied entering the apartment to take down the flags.

Throughout the week, the appearance of the dramatically backlit flags had enraged many New Yorkers, drawing scattered protests and rock-throwers, and causing some local residents to fear the situation could escalate into a violent confrontation.

"My feeling is there's a lot of people who wish they'd gone to Charlottesville—a lot of New Yorkers particularly," Mike Schweinsburg, the president of the 8BCD neighborhood block association, told Gothamist. Schweinsburg said he was initially planning on organizing an anti-racist demonstration in response, but feared it could attract counter-protesters.

"If they could make it all the way down to Virginia, they could come out here," he added. "We would have a full scale riot."

#alphabet city
#charlottesville
#confederate flag
#darren keen
#east village
#white supremacist
Do you know the scoop? Comment below or Send us a Tip