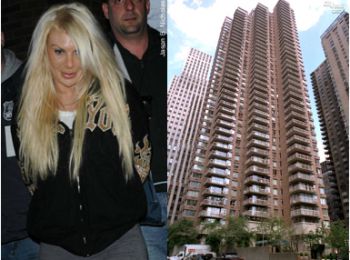 Yesterday afternoon a 32-year-old woman was busted for running a prostitution ring on the East Side of Manhattan that charged $900/hour for its services. Kristen Davis (no relation to the Sex and the City star...probably) operated four websites, sending her gals to one of two apartments she kept for the illegal trysts (the magic apparently happened at both 229 East 53rd Street and 533 Third Avenue).

Davis was arrested at her own apartment, at 235 East 40th Street (pictured), where police found $19,000 in cash; another $500,000 was found in bank accounts linked to her (which have now been frozen). The official charges brought against her were for money laundering and promoting prostitution.

While the police seek out the 15 prostitutes who worked for her, Davis has one of the busiest lawyers in town, Mark Jay Heller, ready to defend her. As she's being held at the Seventh Precinct one the Lower East Side, Heller said he needed to know more about the charges being brought against his client -- however, he stated that she has worked in the hedge fund industry and had no previous arrests. He also noted that “This case is going to generate a media frenzy."

Perhaps that's because she has "the largest black book in America" -- can't wait to find out who's in there! Rumors are already circling about the bust going down because "she was ex-Gov. Eliot Spitzer's personal Madame Butterfly and that she serviced an A-list clientele which included politicians, political contributors, major movie stars and directors, as well as the most prominent sports world figures."