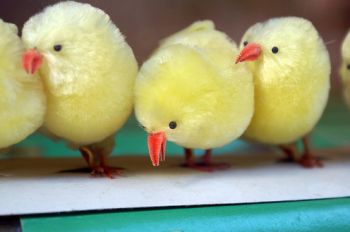 It's not uncommon to hear about animals being housed in New York apartments -- not just cats and dogs, but tigers and monkeys, oh my. The latest animal house can be found in a 50-story luxury condo complex on the East Side.

The NY Post reports on a building super named John Hyranyaz who's been mail-ordering baby chicks and, allegedly, holding them at 100 United Nations Plaza.

The animals stay put in their makeshift, subterranean pen of plywood and duct tape - unbeknownst to many tenants, who can shell out millions for their pads above - until Hyranyaz transports them to his farm in upstate Binghamton.

"I'm raising chickens because I plan to retire," the unabashed super told The Post yesterday. "The Post Office sends the chicks here. These are mail-order chicks."

He claims he's also housed bunnies, geese and a cat (that was stolen). The question being raised is if he actually takes them to his farm, or if they live in luxury with the rest of the residents for an extended period of time. Either way, it isn't illegal, says a Dept. of Health spokewoman; if they were roosters, however, that'd be a different story. Still, residents are speechless at their newly outed subterranean farm, one commenting, "I'm speechless. My God, I don't know what to say." Perhaps Hyranyaz is just one of the urban farming pioneers amongst us.

#animals
#chicken coop
#chicks
#coop
#east side
#John Hyranyaz
#legal
#urban farming
Do you know the scoop? Comment below or Send us a Tip