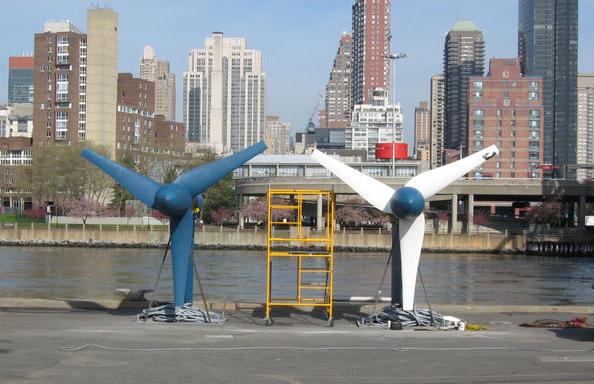 The alternative energy company that has plans to install hundreds of turbines in the East River to harness tidal energy and generate zero-emission electrical power is running into trouble due to the massive amount of energy they are dealing with. The small number of turbines already placed in the East River by Verdant Power have been temporarily removed as the strong currents continue to overwhelm the physical construction of the underwater "windmills." The six turbines that were placed in the water last December and were capable of supplying 1,000 daily kilowatt hours of power and serving the Gristedes supermarket on Roosevelt Island could not withstand currents.

The East River is not actually a river; it's a tidal strait, and one can easily observe the current moving in opposite directions with the tides. Verdant Power's plan is to install a field of turbines anchored to the bottom of the East River and use the currents to generate pollution-free electricity for the city. The currents have proven so strong, however, that the turbine propellers have been sheared off a third of the way down, and stronger replacements were hampered by insufficiently strong bolt connections to the turbine hubs.

The New York Times reports that the company is encountering the setbacks with optimism, encouraged that the East River possesses even more power than originally planned for. "'The only way for us to learn is to get the turbines into the water and start breaking them,' said Trey Taylor, the habitually optimistic founder of Verdant Power."

Hydro-kinetic power generation is drawing increasing interest. The predictability of tides makes it attractive in a way that wind-powered turbines lack. KeySpan is currently partnering with Verdant Power in its project to install East River turbines and a second company, Oceana Energy, recently secured a federal permit to install turbines further up the East River from Verdant's. Some concern has been expressed about the effect of turbines on aquatic wildlife, but Verdant is funding a close examination of the impact of its turbines on fish and other river species. WNYC interviewed Dean Corren, Verdant Power's Director of Technology Development, in April.