The police announced that the man accused of raping and robbing a woman who had been jogging in East River Park last Wednesday has been arrested. Paul Niles, 28, apparently surrendered himself to the police, after surveillance video was released and he was identified by name. 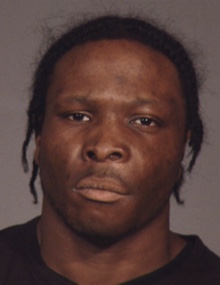 According to the NYPD, a 26-year-old woman was jogging into the park near Cherry Street around 7:30 p.m. on November 25th, when Niles, who was riding on a bicycle, "approached her and motioned for her to be quiet. The victim turned around and started to run in the opposite direction when the suspect grabbed her hair, put his arm around her throat and pulled her into the amphitheater area where he raped her."

Police say that Niles stole the victim's credit card and used it at a deli; footage from the store was released.

The Daily News reports, "Tipsters flooded the NYPD Crime Stoppers hotline after cops released video of the assailant using the victim’s credit card at a nearby bodega after the attack."

Yesterday, Niles turned himself in, and the investigation revealed that around 6:45 p.m. that same day, a 56-year-old woman said she was walking by the FDR Drive and Grand Street when Niles allegedly approached her, tried to talk to her "before grabbing her buttocks and fleeing the location on a bicycle."

Nlles has been charged with rape, robbery and identity theft as well as forcible touching.

#crime
#east river park
#manhattan
#paul niles
#rape
Do you know the scoop? Comment below or Send us a Tip
A new Gothamist is coming! We’ve moved comments over to our beta site. Click here to join the conversation and get a preview of our new website.