A development team is planning to buy and demolish the Grand Hyatt New York, a 26-story hotel near Grand Central Terminal that was originally built in 1919 and renovated by Donald Trump in the late 1970s, the Wall Street Journal reports. The move allows developer TF Cornerstone and MSD Partners, which manages the assets of tech maven Michael Dell, to build a taller structure totaling 2 million square feet.

The project represents the third planned demolition to occur in the wake of the city’s 2017 East Midtown rezoning plan, which sought to incentivize the development of newer and taller office buildings through the purchase of air rights from neighboring landmarks.

Last month, JPMorgan Chase initiated the city permitting process to demolish its 52-story headquarters at 270 Park Avenue. The decision to raze 270 Park, which would be the tallest building in the world to be intentionally destroyed, sparked an outcry from architectural critics and preservationists.

Aside from tearing down a structure deemed to be a modernist landmark, some expressed concerns that such demolitions fly in the face of sustainability. But then again, the rezoning was meant to spur such drastic overhauls.

“One of the goals of the rezoning was to incentivize replacement of existing buildings by allowing larger ones to replace them, so that inherently runs counter to sustainability,” said Kyle Johnson, a board member of Documentation and Conservation of Buildings, Sights and Neighborhoods of the Modern Movement (DOCOMOMO)’s NY/Tri-State division.

DOCOMOMO was among the groups who opposed the rezoning, citing sustainability as one of the reasons.

In an example of what occurred prior to the city's East Midtown rezoning, the new 47-story office tower that has gone up at 425 Park Avenue also involved a demolition. But the old zoning rules encouraged developer L&L Holding to keep 25 percent of the existing building in return for greater square footage.

It’s unlikely there will be any tears shed for the Grand Hyatt, at least in its current form. Under Trump, who no longer owns the building, the Beaux-Arts-style building was wrapped in shiny bronze-colored glass and aluminum. In 2011, the Hyatt underwent an $130 million renovation, in part to rid itself of some of Trump’s tacky design choices.

Originally named The Commodore after “Commodore” Cornelius Vanderbilt, the hotel once boasted the “Most Beautiful Lobby in the World,” which was also said to be the largest room in the city. Although popular with tourists and business travelers for decades, the hotel went into decline in the 1970s. 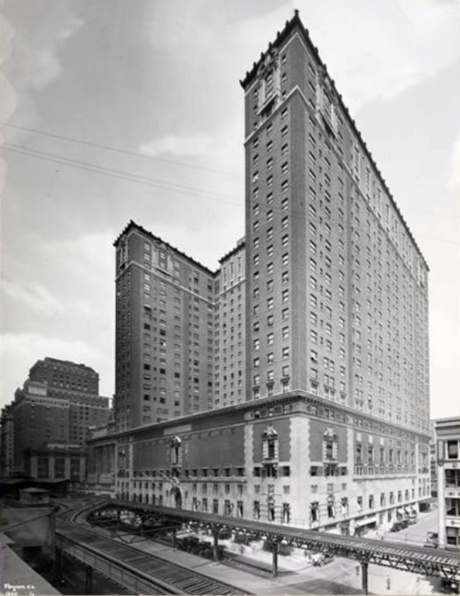 But underneath its glassy Trump-styled exterior, the more refined brick façade of The Commodore remains hidden, for now, at least.

“I wish someone would strip off the glass slipcover over the historic building, rather than demolish the structure altogether,” Johnson said.